The Devil in the Dark

The Devil in the Dark

"The Devil in the Dark" was the 26th episode of Star Trek: The Original Series and released during the show's first season, first airing on 9 March 1967. The episode was written by Gene L. Coon and directed by Joseph Pevney. It was novelized in Star Trek 4 by James Blish and adapted as a fotonovel in 1978.

The Starship Enterprise responds to a distress signal from the mining colony and Kirk, Spock and McCoy are plunged into on of their more bizarre adventures as they race against time to save human lives, the colony… and something they did not expect to find. Aware of his peril, Spock moves alone through uncharted regions of the soul, in order to discover the astonishing truth about… The Devil in the Dark.

In the mines of Janus VI a group of miners arrive to relieve Sam of his guard duty. After he voices his concerns at the posting Schmitter is left on duty while the rest of the miners continue on to other parts of the mine. Moments later the miners hear a scream and run back to Schmitter, to find nothing but his charred remains.

Captain's Log, Stardate 3196.1: A distress call from the pergium production station on Janus VI has brought the Enterprise to that long established colony. Mr Spock, Doctor McCoy and I have beamed down to meet with chief engineer Vanderberg, administrative head of Janus VI.

The landing party from the USS Enterprise meet with Vanderberg who explains his predicament; Three months prior the miners opened a new level, rich in pergium and other minerals such as uranium, cerium and platinum. Typical conditions for the planet endowed with immense mineral riches. But something went wrong, the miners automatic equipment began to malfunction as parts of it were inexplicably corroded away. Maintenance engineers were sent to repair the equipment but were later found burned to a crisp. Something was in the mines of Janus VI sabotaging the machinery and killing the miners, at first in the lower levels, but over time moving up. The miners have stopped working, fearing their lives, if the Federation wants pergium then it’s down to the Enterprise to fix things so they can mine it.

Vanderberg and his chief processing engineer Ed Appel leave Kirk and Spock to examine maps of the mines. McCoy returns from examining the last victim’s body, reporting what’s left the man indicates he was corroded to death rather than suffering typical burning, almost as if he’d been thrown into a vat of acid.

Meanwhile elsewhere in the mine another guard is attacked. Vanderberg and the Enterprise team are called to the scene to find the reactor room damaged, and the reactor’s circulator pump stolen. The Enterprise has no replacements for such an antiquated device. The miners face two outcomes, death by asphyxiation if they turn the reactor off, or death by radiation poisoning if they leave the damaged device on.

Kirk has Scotty work on crafting a temporary replacement part while the team on the planet search for the missing pump. Kirk, Spock and McCoy discuss their options, Spock puts forth that maybe they dealing with life not as they know it, perhaps a silicon-based lifeform resides of Janus VI. Kirk has Giotto form a security team to hunt for the lifeform while he goes to inspect Scotty’s handiwork on the reactor.

After adjusting his tricorder Spock picks up a silicon signature, but not before the creature attacks one of the Enterprise’s security team. Next to the charred remains they find a freshly formed tunnel, and then, come face to face with the creature. After a phaser shot the creature retreats into another tunnel.

Kirk regroups his security team and redeploys them to hunt with knowledge of the creature’s behavior and abilities obtained in the brief contact. Scott informs Kirk his attempts at repair have failed, the Enterprise begins to beam the colonists up to preserve the limited air.

On the hunt, Kirk and Spock split to try and locate the creature. Then, trapped by a cave in the creature caused, Kirk meets it again. The two have a stand-off the creature weary of Kirk’s phaser, Kirk tries to talk to the being while waiting for Spock to arrive.

When Spock does turn up the creature allows him to enter the area and then permits him to mind meld, at first all Spock can read is pain. The Horta attempts an alternative form of communication, etching into the rock “NO KILL I”. From his contact Spock could detect the creature is a highly intelligent being, called a Horta.

Kirk calls McCoy to the scene to try and treat the Horta’s painful phaser wound. While they wait Spock attempts another mind meld. McCoy arrives in time to hear Spock’s findings while he tries to treat the Horta. Still melding Spock and the Horta tell Kirk where the missing pump is, he goes to retrieve it.

Kirk returns with the pump and a broken Horta egg, unwittingly the miners had destroyed thousands of them with their machinery, spurring the mother Horta into retribution. The miners arrive to destroy the Horta and are stopped; Spock fills them in on their crimes. Then Kirk comes up with a way for the Horta and Humans to live peacefully together, the Horta tunneling and miners processing to run an efficient mining operation together.

Captain's log, stardate 3196.1.
We are en route to Janus VI in response to a distress signal from the pergium production station located beneath the surface of the planet.

Captain's log, stardate 3198.3.
In orbit around Janus VI, First Officer Spock, Chief Surgeon McCoy and I are about to beam to the production station to meet with Chief Engineer Vanderberg, administrative head of the mining colony. 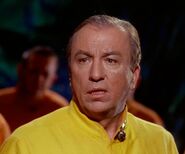 Kirk and Spock at the mouth of a Horta tunnel.

The Vault of Tomorrow. 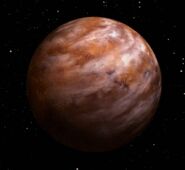