The Original Series (annual) No. 5

Captain's log, stardate 5268.1
The Enterprise is headed for Starbase 9, where we will put in for minor repairs and some well-deserved shore leave. True to form, my science officer has volunteered to remain on the ship for the duration of our stay. As previous logs will show, Mister Spock would rather further his research than blow off some steam. I just hope it doesn't catch up with him some day. End log entry.

Captain's log, stardate 5258.1
Forty-four members of my crew have now been afflicted with these dreamlike experiences—and we're no closer to finding out the cause of them than we were before. To make the puzzle even more confusing, two of those crewmen—Ensigns Pavel Chekov and Jorge Sildar—dreamed about incidents they never experienced in the first place... because they had yet to sign on with the Enterprise when those incidents took place. Chekov, for instance, dreamed of something that happened to Lieutenant Stiles—who served under me during my first encounter with the Romulans. But Chekov never met Stiles—nor had he studied any account of the incident. At first we assumed the dreams were memories, plucked out of each individual's mind. Now, it seems the dreams are externally imposed.

Captain's log, stardate 5268.9
In accordance with Doctor McCoy's suggestion, I have attempted to contact Janice Rand, now a lieutenant posted at Starfleet Headquarters in San Francisco. She has not answered our subspace call. However, I have received a response from Admiral Durham of Starfleet Command.

Captain's log, stardate 5269.5
Homing in on the coordinates obtained by Mister Spock, we have arrived at an unexplored solar system... one that contains a single, uninhabitable planet. It is here we've begun our search for Janice Rand.

Captain's log, supplemental
This place is a maze, but I think we've finally gotten a fix on Lieutenant Rand. Interestingly enough, she's not alone. In fact, according to my tricorder, she's in the midst of several hundred aliens... live ones. Though they're in the same sluggish state as my former yeoman. At this time, I don't expect any trouble from them. Of course, that could change at any moment. Kirk out. 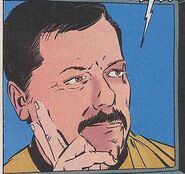