The Eagles Have Landed

The Eagles Have Landed

24:12.17
"The Eagles Have Landed" was an 8-page Star Trek: The Original Series comic strip published in 1969. It was the seventh story arc in the UK comic strips series, released in four parts within issues of Joe 90: Top Secret. This was the seventh of 11 stories illustrated by Harry Lindfield. In this story, Kirk's compassion leads him to rescue a group of prisoners.

Teaser, 23 August 1969
When a disobedient crew member blasts at a gigantic "eagle" out in space, Captain Kirk of the Starship Enterprise discovers that the bird is really a strange space ship. He goes to its rescue in a space bug…

While exploring a new region of space, Spock spots what looks like a huge living eagle, which suddenly dive-bombs the USS Enterprise. Ship's phasers disable the unusual vessel. Kirk, David Bailey and at least four others pilot Space Rescue Bug 5 through a gap in the damaged hull to offer assistance, but their ship is seized by grapplers operated by Agonites. The Enterprise fires at the space eagle to keep the Agonites busy while Kirk's team detach the grapplers. Bailey spots a crowd of humanoid refugees. As the space bug carries a full load of them back to the Enterprise, grateful Takku from Womata explains how they'd been taken by evil Agonites — who soon return with reinforcements. Spock launchs three armed space bugs to help fight off the Agonites and rescue everyone else. The refugees are brought to a nearby class M planet and provided with provisions and weapons.

As the Enterprise orbits the planet, a dozen space eagles arrives in formation. Hopelessly outnumbered, Kirk signals for a truce to confer and meet with Roggaf of Agoni. Kirk soon learns that Agoni was a galactic police base, and these prisoners were actually convicted criminals. To make up for his interference, Kirk offers to recapture the criminals. Although Takku resists and is killed, the rest are rounded up peacefully. 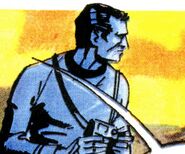 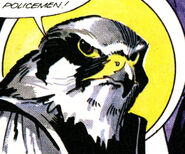