The Original Series (Gold Key) No. 60

A ghostly presence… haunts the Enterprise! – "The Empire Man" was the 60th issue of Gold Key Comics' 1970s series of Star Trek comics. The issue was written by John Warner and drawn by Alden McWilliams.

Stardate 2314.6: The USS Enterprise diverts in response to a distress call from Terrellian II in Quadrant IV. The Terralyns find themselves under attack by an unknown marauder craft. Upon meeting with Minister Scorvik Kirk and McCoy learn -- and see -- each attack is proceeded by the appearance of etheric woman the Terralyns call "The Ghost". The Ghost may be trying to warn the Terralyns, but she is mute.

Aboard the Enterprise, Spock makes contact with the marauders pilot, who calls himself Zar-Tan. He warns the Enterprise that the planet is his, and he will destroy the Terralyns and the ship if they interfere. Spock attempts to incapacitate the marauder with tractor beams, but Zar-Tan resists so much, he crashes on the planet. Kirk, McCoy and a security team find Zar-Tan, and after a brief struggle, capture him. The Ghost witnesses this, and inexplicably unleashes a seismic attack on the planet, injuring the Terralyn chancellor. Showing remorse and compassion, the Ghost touches the chancellor, healing him.

Examining Zar-Tan in the Enterprise sickbay, McCoy finds there is no way to remove the attacker's body armor. Spock discovers the entire planet is surrounded by a ring of energy. When a security team beams down, the Ghost is able to follow the transporter signal back to the Enterprise. Meanwhile, McCoy goes to Zar-Tan's security cell, only to be taken hostage by him. Zar-Tan takes his prisoner to the bridge, where Spock's analysis of the planet's energy ring reveals a resemblance to brain wave patterns. Zar-Tan attempts to lock the ship's phasers onto the planet, but recoils in fear when the Ghost steps onto the Bridge. The entity merges with Spock to use his Vulcan mental powers to unlock Zar-Tan's buried memories of the planet. Spock/Ghost explains this world, once known as Thelema, was on the brink of destruction by a radiation cloud. The Thelemites discover the radiation won't harm plant life, and the entire civilization's mental patterns are recorded into the native flora. A cell from each citizen was used to make an artificial carrier body -- Zar-Tan -- to preserve the Thelemites' organic structure. Zar-Tan was sent off into space, programmed to return when the radiation was no longer a threat. The Thelemites soon learn, however, their plant forms could not communicate, either with Zar-Tan or the Terralyns. The most they could manage was to generate the image of the Ghost. The truth revealed, Spock/Ghost deactivates Zar-Tan and informs the Terralyns how to restore their new neighbors. The Thelemites agree to share their technology to convert people into plants, which Spock observes may be an improvement for humans. 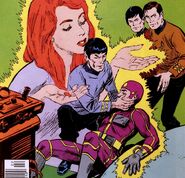 Sulu and Kirk look on as The Ghost contacts Spock through a mind-meld with Zar-Tan. 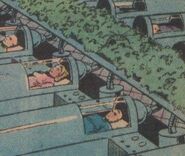 Thelemites.
Add a photo to this gallery

Retrieved from "https://memory-beta.fandom.com/wiki/The_Empire_Man?oldid=683379"
Community content is available under CC-BY-SA unless otherwise noted.