While the USS Enterprise crew, along with Captain Kirk, are surveying the planet Alfa 177, geological technician Fisher slips down a rock, cutting his hand. Also, his uniform is smeared with a yellowish magnetic ore. He beams back to the Enterprise for treatment. During the transporter cycle, Scotty detects a malfunction in the device. Fisher is eventually beamed aboard and reports to sickbay, but the transporter appears to still be working correctly. Then, Captain Kirk beams up from the planet. He apparently materializes normally. When the transporter room is empty, another person materializes - another Kirk!. He has been split into two beings. The first Kirk to materialize blended all of Kirk's positive qualities - compassion, love, tenderness. The second Kirk blended all of Kirk's negative qualities - hostility, lust, violence.

Before the transporter malfunction is discovered, the evil Kirk roams the ship, demands Saurian brandy from McCoy, and attempts to rape Yeoman Rand. The evil Kirk is eventually captured, but during the process he damages the transporter.

Meanwhile, Sulu and the rest of the landing party are struggling to surive on the planet, as the temperatures continue to drop.

Finally, Scotty repairs all the damages to the transporter and Kirk's two halves are re-integrated. Feeling confident again as captain, he gives the orders to beam up the landing party, saving them from freezing. 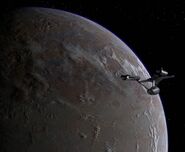