Year Four: The Enterprise Experiment No. 1

2269
The Enterprise Experiment, Part 1 was the first of a five-part comics miniseries published by IDW Publishing beginning April 2008. The series was written by D.C. Fontana and Derek Chester with art by Gordon Purcell, and continues the voyages of the USS Enterprise after the events of the Year Four miniseries. In this story, an experimental cloaking device malfunctions on the Enterprise.

From solicitations: A sequel to the classic episode "The Enterprise Incident"—originally written by Fontana herself—where Kirk and Spock found themselves trapped on an Enterprise out of phase with space itself and facing a plot of revenge from Romulans!

The balance of power. Moral compasses. Nothing but terms. The last few years have seen a multitude of strange discoveries. From those as mundane as the Romulan cloaking device to as fantastically alien as the Guardian of Forever. And despite Friedrich Nietzsche's age old warning, the cost of holding onto power must always be paid.

Aboard the Galileo II, Spock comments on Kirk's uncharacteristic silence with the captain soon revealing that his silence stems from seeing Carol Marcus. Turning back to the readouts, Spock confirms that it has been 10.5 hours since their last contact with the USS Enterprise. Activating the communicator, Kirk congratulates Scott on a successful test of the cloaking device only to receive no answer. Since Scott leaving the test area is unlikely, the two can only conclude that the cloak has malfunctioned. Spock theorizes that he can use the shuttle to trigger the shuttle bay doors but to do so he needs to be within 2,000 kilometers of the ship. Deducing Scotty would likely have taken the ship to the nearby white dwarf, the two set a course, soon revealing the doors. Touching down, the two find the doors are forced open leaving them no choice but to don environmental suits.

Making their way to engineering, the duo find the ship abandoned and that the cloak has become intangible, somehow altering the molecular cohesion of the hull. When Spock attempts to cut off its power, a console violently explodes. Though Spock is physically unharmed, he is now able to glimpse a ghostly Arex. Once Spock mind melds with Kirk to allow him to see the Triexian, the crewman explains that he and the entirety of the crew have been rendered out of phase with reality. The only reason he can even communicate with the two is due to his telepathy. As is obvious as this point, the cloak is responsible for recent events.

After heading to the white dwarf, Arex confirms that the strange readings are not a scanner malfunction. Somehow the ship's molecular integrity is compromised. And worse yet, organic matter is now being affected such as Sulu's hand. Scott and Arex run down to engineering to shut down the cloak only to find it has begun drawing power from other systems and cannot be shut off. Being called to sickbay, McCoy informs that this phenomena is not unlike their interphasic encounter with the Tholians. Soon the ship and everyone aboard will be dephased, though where they will end up is unknown. After Arex's science confirms that the ship has less than 20 minutes left, Scott realizes the transporter might hold the key and leads the Triexian off. The two engineers scramble to make the modifications but ultimately begin to phase away. The last to go, Arex launches a distress beacon.

But Kirk and Spock never found the beacon. Assuming it was out of phase, the two reveal they only found the Enterprise, largely by random chance. And now they two are beginning to phase. As Spock runs to complete the modifications on the transporter, Kirk goes off to get their spacesuits for even a few extra minutes of protection.

After giving Spock his suit, Kirk reports that the sensors are detecting an approaching contact. Kirk heads to the bridge and manages to force a manual reboot of the bridge systems. As the viewscreen comes online, Kirk is greeted to the unpleasant sight of a Romulan warbird on approach. Time has most definitely run out for the Enterprise crew.

And to make a bad situation even worse, their old friend Liviana Charvanek is at the helm.

Cover A art by Rob and Joe Sharp. 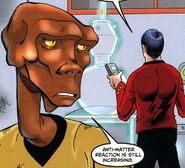 Montgomery Scott and Arex Na Eth attempted to shut down the phase cloak.