Year Four: The Enterprise Experiment No. 2

2269
The Enterprise Experiment, Part 2 was the second of a five-part comics miniseries published by IDW Publishing in May 2008. The series was written by D.C. Fontana and Derek Chester with art by Gordon Purcell, and continues the voyages of the USS Enterprise after the events of the Year Four miniseries. In this story, Romulans board the helpless Enterprise following a failed experiment.

From solicitations: With the Enterprise crippled and out of phase in a cloaking experiment gone haywire, a Romulan strike force storms the starship, looking for revenge over their stolen technology. Kirk and Spock, meanwhile, must find a way to repel the invaders, while at the same time reverse the experiment and restore the ship — before it fades away completely!

Following her capture, Liviana Charvanek is escorted by Spock as part of a prisoner exchange. The opposite is none other than Ambassador Sarek who was lured to Romulus under a false pretence of negotiation and is his usual self. As the two parties go their separate ways, Liviana coyly promises to see Spock again.

And so it is that Liviana finds the USS Enterprise once again. Well the doors at least. Though Kirk tries to put on a brave face, Liviana reveals her trump card: Arex's distress beacon, seized by her and having told her everything about the crippled state of the Enterprise. When Kirk refuses to surrender, Liviana orders a barrage fired only for the artillery to harmlessly pass through the vessel. The only recourse open to them is for Subcommander Tal to manually board via shuttlecraft. Below, Spock has finished his modifications and materialized Arex who scrambles to aid Kirk in closing the shuttle bay doors. Though they succeed, Tal's shuttle manages a fiery crash landing.

Reconstituting the bridge crew, Spock delegates Sulu to man his station and Chekov to aid Kirk in repelling the boarders while he and Scott go to engineering to aid Arex. Though Scott believes he can shut down the cloaking device, Spock overrules him. Unless the cloak is shut down at the precise moment, they will find themselves at the mercy of the Romulans. In the hallways, Kirk's firefight goes poorly with the humans being forced to retreat to the bridge and barricade themselves inside. With the brief respite, Kirk contacts Spock who reveals he can shut down the cloak but doing so will require taking the warp engines offline for five minutes. After confirming that the hull is sealed and the cloak is still at 100%, Kirk orders a new course set...right into the heart of the pulsar.

Though Sulu is shocked, Kirk quickly explains that the Romulans won't dare follow and the cloak will protect them from any harmful effect. Or at least he hopes it will. Quickly deducing the plan, Liviana orders the ChR Cheron hailed. Emerging on the other side of the pulsar, Kirk orders the engines and cloak taken offline. As Tal's team reaches engineering, the cloak deactivates and the full crew reappears, quickly overpowering the boarders. The mood is soon spoiled by the approach of the Cheron, a Romulan D7. The Enterprise immediately heads back towards the pulsar, going to warp at just the right moment so as to allow the resulting gravity wave to snap their foe's neck.

Limping to Deep Space Station K-12, the Enterprise puts herself in for repairs and to get the cloak removed. Though Scott is eager to see it gone, Kirk and Spock find this short sighted. Though this prototype malfunctioned, cloaking technology is the next stage of defence. And if this cloak's effects had been intentional and controllable, it would dramatically alter the balance of power in the quadrant. And this particular cloak was specially developed by Dr. Bendes Kettaract using what little knowledge Starfleet managed to gleam from the Guardian of Forever. As the nameless engineer begins the final procedure to remove the cloak, Kirk hopes his department can iron out the kinks. Before leaving though, he asks what section the man works for.

Sarek was exchanged for Charvanek. 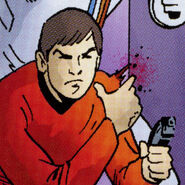 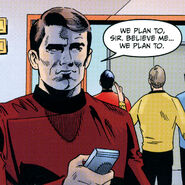