Year Four: The Enterprise Experiment No. 3

From solicitations: A mysterious discovery on Loren 5 sets the stage for conflict between the Klingon Empire and the Federation. With the sudden absence of Organian intervention between the two powers, it could mean all out war. Now the crew of the Enterprise find themselves caught up in a race to discover the true nature of the secrets of Loren 5, as well as why the Organians have disappeared.

2270. Three years since the failed Klingon invasion of Organia and the resulting humiliation. A humiliation that weighs heavily on the one who failed to secure the planet: Kor, son of Rynar. The failure cost him his house's respect and attempts to breach the Neutral Zone and attempts to regain his reputation have resulted only in third-degree burns from weapons too hot to touch. As he mentally rants, a subordinate approaches him about an intercepted Federation transmission regarding a mysterious find on Loren 5 in addition to a rich bounty of dilithium.

At Deep Space Station K-12, Kirk wraps up his yearly physical, confirming that the phasing has left him with no lasting effects. The hypo is for his increasingly melancholic state. A state that McCoy believes to have been brought on by seeing Carol again. The name only serves to send Kirk away, brusquely telling McCoy that men like them don't have the luxury of family. But as much as Kirk tries, his mind drifts back to the last time he saw his ex-wife.

At Sam Kirk's funeral, Kirk mourned the chance to never establish a closer bond with his brother and heal their old grievances. He'd always thought he would go first on some alien world while Sam, and eventually Peter, would carry on the Kirk lineage. Indeed, he had begun pondering resigning from Starfleet altogether to take care of his nephew, but the boy had only requested his uncle's aid in getting accepted into Starfleet Academy, finding nothing left for him on Earth. A sentiment Kirk knows all too well. Sparing a glance at Carol, Kirk reflects that Peter at least, isn't being forced to stay away from his family. Though he thought of speaking to her again, he ultimately decided against it. The Kirk legacy, his legacy, will live on through Peter, not David.

Stepping onto the bridge, Kirk is informed that a new mission already awaits them. They are to proceed to K-22 in the Lorenian system and find why the station has suddenly become non-responsive with more details to be forthcoming. In orbit of Loren 5, Kor's crew find they are now able to access their weapons once again. With a smirk, the warlord orders an orbital bombardment.

Dropping out of warp, the USS Enterprise is greeted to the sight of a destroyed K-22, with Klingon weapon signatures detected in the debris. A reading which should be impossible given the Organian Peace Treaty. Further orders then come in, revealing the destruction of multiple outposts along the Klingon border and ordering the Enterprise to Loren 5. As a new course is plotted, Kirk orders a meeting of the senior staff.

When McCoy arrives, Kirk explains the heart of the problem. For the past two years, the Organians have prevented any form of hostilities between the Federation and the Klingon Empire. Since total war with the Klingons has no longer been a concern, Starfleet instead turned its resources to preparing for total war with the Romulans whom have been viewed as the greater threat since the development of the cloaking device. But even then, the Klingon border has been monitored by advanced listening outposts which have been inexplicably destroyed. Though McCoy proposes contacting the Organians, Scotty is ready to take the fight to the Klingons. The meeting is interrupted by Sulu saying they've arrived.

Declaring red alert, Kirk has Uhura and Spock perform surface scans. While Uhura can hear nothing, Spock finds evidence of orbital bombardment and atypically...no Klingon ships. Leaving Scott in command, Kirk leads down an away team to get answers. Upon materializing, the away team is greeted to a group of miners losing a firefight with Klingon infantry. Taking strategic positions, the Enterprise crew is able to pick off the Klingons, even taking one prisoner, though losing Timmons and injuring Fritz. The mining supervisor, Sanderson, an old friend of Kirk's, soon makes himself known, who insists everyone return to the Enterprise so he can tell them what happened.

After relocating to the dark side of the moon, Sanderson is briefed on the recent events and the apparent abandonment of the Organian Peace Treaty. After he struggles to process the troubling news, he reveals their find is located ten kilometers northeast of the settlement. As the Galileo streaks towards its target, Kirk reflects the possible war that is to come and the mystery of the Organians, wondering whether Starfleet let itself become too content to let the aliens handle the Klingons. The power of the Organians could not be matched and served as a powerful and humbling reminder that there are always those who will be stronger out there in the galaxy. Perhaps...perhaps that is why Kirk has been so distant as of late. Just when humanity became comfortable enough to think of themselves as the centre of everything, the rug was violently pulled out from under them.

As the shuttle breaks through the atmosphere, it reaches its target. A massive alien city.

Captain's personal log, supplemental.
Repairs are nearly complete from our encounter with the Romulans during our test of the new cloaking device. Several of my crew died during that operation, and I've spent my time here at K-12 reflecting on their services and sending letters of condolence to their families - one job they never taught at the academy. I have felt the burden of command weigh heavily on my conscience in recent days.
Shortly before we left on this mission, I saw Carol and I am led to thoughts of my son. Many families are tested by their service in Starfleet, and I feel torn between my duty as a captain and my responsibilities as a father. To quote Charles Dickens in A Tale of Two Cities, "It was the best of times, it was the worst of times..." Never has that line of literature rung so true to me. 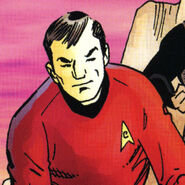 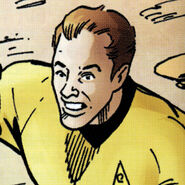 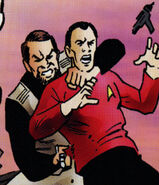 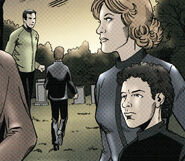