Year Four: The Enterprise Experiment No. 4

Year Four: The Enterprise Experiment
The Enterprise Experiment, Part 4 was the fourth of a five-part comics miniseries published by IDW Publishing in July 2008. The series was written by D.C. Fontana and Derek Chester with art by Gordon Purcell, and continues the voyages of the USS Enterprise after the events of the Year Four miniseries. In this story, artifacts from the Preservers were discovered on Loren 5.

From solicitations: The untold fourth year of the Enterprise's legendary five-year mission continues! The Klingons have discovered what appears to be a Preserver obelisk, but can the Enterprise prevent them from unlocking its secrets before it's too late? And what of the Organian truce? The answer lies within!

With the surface of Loren 5 blown away, the landing party discovers an advanced alien city, built using construction techniques far beyond Federation science. Venturing within, Kirk and Spock can deduce the city was already ancient even when Loren 5 was rendered lifeless eight centuries ago. And yet...there is no sign of decay anywhere. As they explore, the come across an obelisk near-identical to the one they discovered on Amerind, making it very likely they are walking in the footsteps of the Preservers.

Aboard ship, McCoy finishes up his work on Fritz, the rest is up to the crewman's natural immune system. As he rests, McCoy reflects on the powerful duty he has and the toll it takes on him. He can heal a million wounds but it is those he cannot, physical and emotional, that haunt his dreams.

Some years back, McCoy sits in attendance as Joanna McCoy delivers her valedictorian address, the first time father and daughter are seeing each other in years. After the speech, the two meet and discuss Joanna's childhood. Though she understands her father's desire to heal the wounded, she doesn't understand why that desire took him to every planet in the galaxy but Earth. But despite that...she is happy to have him here now. As a parting gift, McCoy gives her a caduceus once gifted to him by her mother.

In the Beta Aurilai sector, the USS Federation is boarded by Subcommander Tal's prison shuttle. Admiral Nogura welcomes the Romulan as an equal. They do not trust each other, but they can still respect each other. In light of recent events, both the Federation and the Romulans view each other as the greatest threats to their parties. While both sides are no doubt willing to fight should it come to that, that does not mean there should be a desire to do so. Intrigued by the almost Romulan cunning behind Nogura's proposal, Tal joins him in a toast.

Aboard the IKS Klothos, Kor is angrier than ever at the lack of progress in determining the location of the "outpost", irritably ordering one of his men plugged back into the Preserver neural interface despite the risks. On Loren, Kirk and Spock discover the interface's absence. Calling Scotty, he has Arex probe the mind of their prisoner to for answers. Though Arex warns the process may cause the prisoner distress, Scott couldn't care less.

In the prisoner's mind, Arex witnesses one of the Klingons be affected by the neural interface causing him to speak in the melodious, song-like, language of the Preservers. Kor immediately orders the device's restraints be removed and the apparatus beamed aboard for study.

After Arex delivers his report, Spock proposes that the Klingon's state of mind was the result of the interface being attuned to the mind of a different species. Much like how the Amerind obelisk gave Kirk amnesia, expect Kirk's biology was similar enough to the Native Americans that he didn't lose his mind. If they want any answers, they need to get the device and re-tune it for one of their species. And that means a smash-and-grab retrieval mission.

With Sulu dressed like a Klingon and Kirk and Spock as his prisoners, the Enterprise team is able to get in the base. Once inside, they two are locked up with Kor soon arriving to "interrogate" them, eager at the prospect of war and confident of a victory given Starfleet's lack of military presence in the sector. As Kor rants, Sulu locates the interface and quickly beams away with it. With the signal given, Arex and Chekov break into the cell and free their friends.

With the artifact in their hands and their friends escaping on their shuttle, the USS Enterprise comes out of hiding and cripples two of the three D7s before warping off after the secrets of the Preservers.

Pulling himself out the rubble, an increasingly unstable Kor swears to pursue the Enterprise across the galaxy and finally achieve vengeance for the humiliations and indignities its crew has made him suffer.

Captain's log, supplemental
We have returned to the surface of Loren 5 in search of Captain Sanderson's discovery. To our amazement, it seems to be a city of unparalleled size and sophistication the likes of which we've never seen. I am unsure what to expect, but it stands to reason that whatever secrets this city holds have also caught the eye of the Klingons.

The Klingons on Loren 5 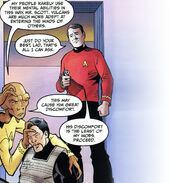 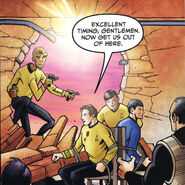