Year Four: The Enterprise Experiment No. 5

c. 2269
The Enterprise Experiment, Part 5 was the last of a five-part comics miniseries published by IDW Publishing in August 2008. The series was written by D.C. Fontana and Derek Chester with art by Gordon Purcell, and continues the voyages of the USS Enterprise after the events of the Year Four miniseries. In this story, Spock interfaces with a Preserver artifact.

From solicitations: In the final chapter of The Enterprise Experiment, a great discovery sends the crew of the Starship Enterprise on a mission to locate an ancient outpost before the Klingon fleet can seize its power for themselves. The answers Kirk and his crew have sought will finally come into focus, as a long-lived mystery is revealed, and new alliances change the political landscape and cause ramifications long into the future. D.C. Fontana, Derek Chester, and Gordon Purcell conclude their Original Series adventure!

Following his safe return to the Federation, Spock accompanies Sarek back to Vulcan. As the two discuss emotions and their roles in Vulcan society, Sarek suggests his son undergo kolinahr. That would however meant a cessation of his duties aboard the USS Enterprise, something Spock is reluctant to do, which Sarek attributes to his human half. Such words remind Spock of the day he chose to leave humanity behind in favour of his Vulcan half.

And it is to this memory that the Preserver neural interface sends Spock's mind back to. As Spock convulses in pain, the device overheats forcing it to be beamed out. The shockwave from its detonation however renders the warp engines off-line. As Spock struggles with lingering memories of the past, he steadily recomposes himself and reveals he has learned secrets of the Preservers and, more importantly, where they need to head.

On the bridge, Spock reveals that the galactic barrier is a Preserver creation. The outposts on Amerind and Loren 5 are designed to power it and therefore protect the Milky Way from extragalactic hostiles. But the barrier was only ever intended to function long enough for the new generation of races to become powerful to defend themselves, hence why the outposts are shutting down and the barrier's strength has begun to ebb. With that, Spock inputs coordinates on the edge of Gorn space, the location where their prize lies. Scott informs that though they can go to warp, they are limited to warp five. From a distance, the IKS Klothos detects the interface's destruction and Kor sets a pursuit course.

The Enterprise drops out of warp at their coordinates to find...nothing. With some embarrassment, Spock realizes he failed to fully account for stellar drift and immediately sets to work computing where the outpost is now. Continuing to watch, Kor orders an escort vessel to send word to their fleet to rendezvous with them.

With the new coordinates inputted, the Enterprise emerges in an asteroid field, any one of which could contain the outpost. As plans are drawn up, Arex begins to be teleported away, Kirk and Spock grabbing him and following.

The trio soon find themselves in the outpost but before they can try to access the consoles, they are met by Ayelborne. Kirk has nothing but scorn for the callous being — now he deigns to show himself? After millions of deaths? Ayelborne is as unflappable as ever, revealing that his people, much like humans, have a Prime Directive that frowns on interfering with less developed cultures. The sheer loss of life however forced them to intervene but now the Organians see they have done more harm than good.

Kirk is hardly willing to listen to the man's condescending attitude. For all his posturing, he seems to adore forgetting that the Federation did not seek war with the Klingons. Ayelborne counters that neither did the Federation use the Organian Peace Treaty to sue for peace. Instead they prepared for war with the Romulans. Kirk scoffs again, denouncing Ayelborne as nothing but a sanctimonious holy man judging them all from atop his perfect mountain. Ayelborne disagrees, once upon a time the Organians and Metrons fought just as violently as the Humans and Klingons now do. But they both followed the path that the Preservers laid out for them and became the allies they were intended to be. The only reason the three are even here is Arex, his species having a role to play in the galaxy's destiny. By way of goodbye, Ayelborne offers something close to a straight answer. Both Klingons and humans are free to go about their own way, but they must not seek Preserver knowledge. Or else there will be consequences.

Kor rages at the Organians once again denying him glory but takes solace in the fact that he can now kill humans once again, ordering an assault on the Enterprise. The Enterprise immediately turns tail back to the border, passing back into friendly territory just in time. The USS Federation then appears with Nogura ordering Kor withdraw immediately. When Kor responds with usual Klingon boasts, a fleet of Constitution-class ships decloak and mercilessly open fire forcing Kor to retreat while the Enterprise sails off to Starbase 11.

On a ruined planet, Koloth has a hearty laugh at Kor's most recent embarrassment. But nonetheless he agrees that measures must be taken to ensure the Empire's dominance. Even allying with the Romulans. Liviana's terms of alliance are hardly cheap: requesting twenty D7s in exchange for aid in developing better cloaking devices. Once the Klingons leave, Liviana despairs that the barbaric and brutish Klingons have the largest territory but that despite that, the Federation is infinitely smarter than them. So which should the Romulans fear more? Stepping out the shadows, Nogura only laughs. One day, the Federation and Romulans will go to war but until then, they can be of mutual advantage to one another.

After briefing the staff at Starbase 11 on their latest adventure, Kirk despairs that recent events have seen the rise of a more militaristic attitude in Starfleet with barely an eyebrow raised at the new worlds and lifeforms they've encountered. But the friendly banter between Spock and McCoy gives Kirk hope that things may yet get better. If all else fails, the friendships they've formed these past four years will always be with them. 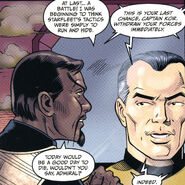 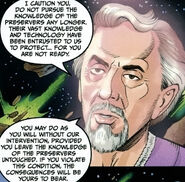 The USS Federation in battle 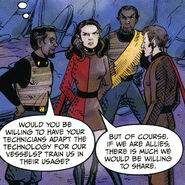