2256–2257
The Enterprise War is the fifth novel for the television series Discovery, written by John Jackson Miller, published on 31 July, 2019.

A shattered ship, a divided crew—trapped in the infernal nightmare of conflict!

Hearing of the outbreak of hostilities between the United Federation of Planets and the Klingon Empire, Captain Christopher Pike attempts to bring the USS Enterprise home to join in the fight. But in the hellish nebula known as the Pergamum, the stalwart commander instead finds an epic battle of his own, pitting ancient enemies against one another – with not just the Enterprise, but her crew as the spoils of war.

Lost and out of contact with Earth for an entire year, Pike and his trusted first officer, Number One, struggle to find and reunite the ship’s crew – all while Science Officer Spock confronts a mystery that puts even his exceptional skills to the test... with more than their own survival possibly riding on the outcome…

Hearing of the outbreak of the Federation-Klingon War, Pike attempts to take the Enterprise home but is ordered by Admiral Terral to remain in the Pergamum Nebula. He instead authorises an exploration of the planet Susquatane.

The Enterprise is fired on by a Lurian pirate ship, which soon after is itself captured by the Boundless, a culture at war with the Rengru who forcibly recruit soldiers from other worlds, placing them in battle armour that limits their autonomy. The Lurian captain, Baladon, offers to help them capture soldiers from Starfleet. A raid on Sasquatane sees them capture thirty crew including Spock and Lieutenant Connolly.

Spock does a deal with their commanding officer, Kormagan, to help her capture the Enterprise, hoping to turn the tables. Things are complicated when the Rengru also attack. Spock attempts to rejoin the crew but Pike, unable to recognise him in the armour, shoots him off the ship's hull. The Enterprise is so badly damaged they are forced to use saucer separation to avoid a warp core breach. The Boundless and Rengru both give the ship up as useless.

Connolly learns the history of the war: The Boundless are led by five races who once shared the planet K'davu with the Rengru. One day, the Rengru invaded their territory and began burrowing themselves into anyone they encountered, most of whom were euthanised. The Boundless fled the planet and banded together to retake it. The war has been going on for generations.

The Enterprise saucer under Pike crashlands on a moon they dub Defoe, while Spock is stranded alone on a neighbouring moon he names Skon's World, within communicator range. After many months, the Enterprise is able to return to space and retrieve Spock who, close to death, has had an encounter with the Red Angel that has left him withdrawn almost to the point of catatonia.

The stardrive section under Number One brings aboard a Rengru who immediately joins with the first officer, eventually forming a symbiotic relationship that gives her influence over the other Rengru in the area. She directs them to reunite the two halves of the Enterprise. Connolly does a deal with Kormagan to give her the Enterprise's transporter technology and retake K'davu, after which the Boundless will help the Federation defeat the Klingons. Pike uses Spock's armour to trick them and take the Boundless leadership prisoner.

The Enterprise carries the Boundless leaders through the Rengru blockade to K'davu where they learn the truth: The planet was about to be devastated by radiation and the Rengru sought to preserve all cultures, but their attempts to communicate with them by physical bonding were interpreted as an attack. Not recognising the Boundless when they encountered them in space, they fought with them. The few members of the other species who remained on K'davu have peacefully bonded with Rengru, giving them long life. The Boundless have the choice of also bonding with the Rengru, remaining on K'davu as themselves or finding new worlds elsewhere on which to settle. Baladon and his remaining crew set off to colonise another planet while the Enterprise crew are finally reunited and depart.

Spock is taken off the ship by Doctor Boyce for treatment and the Enterprise heads for home, only to receive seven mysterious signals… 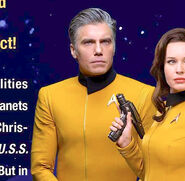 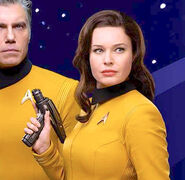 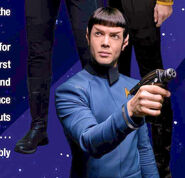