2371
The first original novel based on the hit series!

The USS Voyager is in desperate trouble, her systems damaged, her warp engines failing. Without immediate repairs the starship and her crew will be trapped forever between the stars. Captain Kathryn Janeway must guide her ship to an ancient, deserted planet that could hold the key to their survival—a planet that is hiding more than one deadly secret…

Shortly after B'Elanna Torres has been promoted to chief engineer, USS Voyager's resources and power begin to run desperately low. At the suggestion of Neelix, they travel to the planet Alcawell (known as "the Station") where they find a planet covered by thousands upon thousands of abandoned but largely untouched starships, along with ruins of an alien culture.

When B'Elanna, Harry Kim and Neelix transport down to the planet, they explore one of the more well-preserved ships until Neelix accidentally triggers a mechanism that transports the ship back in time. Now stranded on a populated version of the planet, over three hundred thousand years in its past, the three Voyager officers are taken into custody by the planet's authorities.

Meanwhile, back in 2371, Voyager is shocked to watch as the ship containing its officers disappears and is almost immediately replaced by another vessel with one alien occupant. In fact, the alien, Kjanders, is an Alcawellian criminal trying to escape the authorities. After he's beamed aboard, Kjanders gives Voyager’s crew an explanation for the byzantine time traveling system and rules that govern life on Alcawell.

The Alcawellians have divided their history into 500,000 year increments, further divided into safe Black Periods and prohibited Red Periods with intra-Period time travel also prohibited. Kjanders reveals that it was a violation of this last prohibition that likely led to the away team's arrest.

Millions of years in Alcawell's past, B’Elanna, Harry, and Neelix are taken to their advocate, Rawlik, who will represent them before Alcawellian authorities. Rawlik doesn’t express much optimism about their chances, but he does appear sympathetic, particularly toward B'Elanna.

The authorities send a Watchman named Drickel to the period the away team arrived from with orders to frighten Voyager's crew away. He quickly learns that the crew won't frighten as easily as past visitors.

Time passes slowly for B’Elanna, Harry, and Neelix in confinement, until Rawlik arrives to explain that their appeal to the authorities failed. Before they realize it, the three have consumed the refreshments Rawlik provided and discovered that it contains poison. As the away team gradually succumbs, Rawlik apologizes and explains that the three killed their guards and escaped upon originally learning that their appeal had failed – and he had to "back-time" to subdue them before the breakout.

Drickel is injured during his effort to scare away the crew. Tuvok and Tom manage to locate the source of the strange activity and disable Drickel's cloaking belt. Once he’s taken to sickbay, Janeway asks for Drickel’s help to rescue her crew, and he eventually agrees. While communicating with his dispatchers, Drickel and Janeway learn that the away team has already been executed.

After proposing various ways to avoid the temporal paradoxes and avoid alerting the authorities, Drickel and Janeway ultimately conspire to go back in time and convince Rawlik to deliver only a drug that simulates death, retrieve her away team’s bodies, and return them to their proper time where they can be revived. 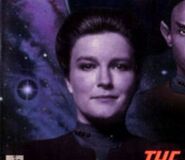 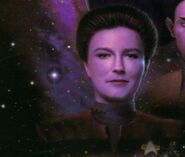 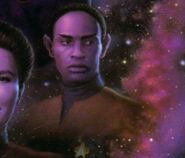