For other uses, see Exiles.

28:45.3
"The Exile" was a TOS comic story appearing in the fourth issue of the Brazilian omnibus Jornada Nas Estrelas in 1976. The seven-page story accompanied Portuguese versions of Gold Key Comics's "Sceptre of the Sun" and "The Legacy of Lazarus". Eaglemoss released an English translation of this story in 2020 in Graphic Novel Collection, Volume 129.

This oft-overlooked story was drawn and lettered to emulate the quirky style of Gold Key's Trek comics. Brazilian writer Edson Perin translated the story for Eaglemoss, after which editor Rich Handley re-lettered the panels in English.

Captain's log, stardate 28:45.3
Passing through the constellation of Zorat, toward the Satsam galaxy, the Enterprise is drawn to a small planet...

At the helm, Hikaru Sulu discovers his hands are being psychokinetically controlled, forcing him to bring the USS Enterprise into orbit of an uncharted planet in the Zorat constellation. James T. Kirk beams to the surface with a landing party to investigate. Spock spots a humanoid in the distance. Kirk tackles him to keep him from fleeing, then tries to communicate with him, but Leonard McCoy doubts the caveman can understand languages. McCoy sees a pregnant humanoid woman lying behind some boulders — and realizing that both lives are in danger, he quickly treats them.

A glow composed entirely of mental energy appears behind them. Drenam thanks them for the medical help and asks forgiveness for having forced their ship to come here. He explains that he is from Arek and that they've saved the life of Arek rebel Madad, whose personality was imbued within the unborn child so that the exile can relearn how to behave in society, while helping advance the cavemen. Drenam hopes that this will rehabilitate Madad, and someday he can live a happy life back on Arek.

Captain's log, stardate 28:46.4
The Enterprise moves away, breaking the infinite silence, while down here, on the small planet, the cry of a child awakens a new civilization! 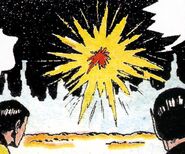 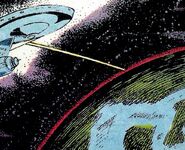