The Eye of the Beholder

For other uses, see Eye of the Beholder.

Star Trek Log Eight:
The Eye of the Beholder

The Eye of the Beholder was the 15th episode of Star Trek: The Animated Series, aired on 5 January, 1974. The episode was later novelized in Log Eight, the eighth installment of Alan Dean Foster's Star Trek Logs, in July 1976.

Another exciting episode from television's most popular science fiction series.

The Eye of the Beholder

A routine follow-up mission to investigate an overdue survey ship leads the crew of the Enterprise to a world where visitors are always welcome… very welcome indeed.

Kirk, Spock and McCoy are suddenly captured by strangely intelligent aliens… telepathic Lactrans who look upon the Enterprise crew as no more than interesting specimens for their already well-stocked zoo.

It was not a happy situation for Captain Kirk and his crew. And there seemed to be no way out...

Captain's log, stardate 5537.1 (novelization). The Enterprise is embarked, for a change, on a routine follow-up mission—to search for a survey ship overdue for report-in in the vicinity of Epsilon Scorpii, last known to be investigating the system of a G4 sun designated Lactra on Federation starcharts.

Captain's log, supplemental (novelization). We have encountered and visually observed the missing survey ship. It continues to maintain communications silence. There is no evidence of violent damage or sentient attack. Mr. Spock will lead a security team in boarding the ship.

Captain's log, stardate 5501.2 (episode). We are orbiting the planet Lactra VII. Our mission is to discover the whereabouts or fate of a six-member science crew. Voice contact having yielded nothing, a landing party beamed aboard to see if the deserted ship's log and computers could give us any information.

Ariel ship's log (novelization). It is now 32 minutes since our last contact with the three members of our crew who beamed down to the planetary surface. Each member of that crew was instructed to report in at ten-minute intervals. As this deadline has long since passed, and subsequent to our repeated failure to contact any member of the landing party, I have decided to take the following action. As senior officer aboard, I, Lieutenant Commander Louis Markel, take full responsibility for this action and any consequences thereof. All three remaining members of the survey team, myself included, will beam down in an attempt to discover the whereabouts of our comrades and, if necessary, to effect a rescue. If for any reason we should fail to return, I, Lieutenant Commander Louis Markel, do hereby accept and acknowledge that I...

Ariel ship's log (episode). It is now 32 minutes since our last contact with the three members of our crew on the planet surface. As the senior officer aboard, I, Lieutenant Commander Markel, have made the following decision. The three remaining crew members, myself included, will beam down to effect a rescue. If, for any reason, we do not return, be it known that...

Kirk, Spock and McCoy beam down to search for the missing crew, avoiding unusual creatures in oddly distinct environments, first in areas of boiling water, then a desert, then a rainforest, revealing highly sophisticated terraforming on the planet, but with no apparent rhyme or reason. The trio are suddenly ensnared by the tentacles of 30-meter-long slug-like Lactrans. The lifeforms carry the officers to the Lactran city, where they are deposited in a habitat comfortable for Humans secured with a force field — they are Human zoo specimens.

Missing Ariel officers Randi Bryce and Tom Markel greet them; a third officer has also survived but is sick. Through experimentation, the officers learn what they can of their captors, who are highly intelligent, advanced and telepathic, thousands of years more advanced than Starfleet. Spock is unable to reach them telepathically. McCoy conveys with conviction that a medkit is necessary to help Nancy Randolph, and his kit is brought to him. Spock realizes that if the Lactrans were to go to the trouble, they would be capable of understanding specific thoughts from the landing party. Kirk feigns illness and the group concentrates on the need for a communicator. A six-year-old Lactran picks up a communicator from the exhibit table and brings it into the habitat to Kirk. When Kirk reaches out and signals the ship, the child swiftly retrieves the device, just in time for it to be caught in the transporter beam, confounding Montgomery Scott when it rematerializes in the transporter room.

The child's parents panic, having been unaware that Humans might be deadly. They probe Kirk's mind to find out what had happened to their baby. Scott is able to convince it that the ship isn't a toy and that Scott isn't a pet. They beam back together, saving Kirk from a mental attack by five concerned adults.

After the parents "dumb down" their thoughts to a level comparable to baby talk, the infant is able to relay those messages to Spock, and communication is established. After some deliberation, the Lactrans agree to free the officers, on condition that they retrieve a final exhibit for their Lactra VII zoo: a jawanda, a nearly mythical non-sentient creature of which they know little except for where to begin their quest. Although initially hesitant to bring their child along, the Lactran parents are set up in a cargo bay near the hangar bay where the ship's corridors are widest.

The Enterprise proceeds to the Boquin system near the edge of the Milky Way Galaxy. A landing party travels through the hostile atmosphere of Boqu II in a shuttlecrawler and meets Hivar the Toq. The treelike Boqus are suffering from an epidemic, and are willing to help with the jawanda if McCoy can cure them. Eventually, McCoy and K'ang Te identify the cause of the affliction and develop a viable treatment.

Jawanda are massive cosmozoans that feed off interstellar radiation away from gravity wells. Boqu II radiates more energy than it absorbs and has a weak gravity, which made the planet a delicacy for the jawanda, but their presence cooled the surface and made life harder for Boqus. They eventually drove the jawandas away by using massive gravitic engines installed on six of the planet's moons which could herd and repel the huge creatures. Hivar renovates an ancient control mechanism which will allow the moons to follow the Enterprise during a trip into intergalactic space in search of a specimen.

Six days later, heading at a maximum speed of warp three, they detect the transmissions of a jawanda, but have to jettison the moons in order to travel at warp five to intercept it. The millimeter-thick animal is the size of North America and wraps itself around the ship to absorb radiation from the warp drive. With the ship powered down, Kirk, Spock and McCoy examine the creature in spacesuits, then are stuck on it when it unwraps and departs at warp speed like a huge flying carpet. The Enterprise catches up with it and retrieves the officers, only to become enveloped again. They use the opposite tactic this time, engorging the animal with maximum warp power for several minutes. As it moves off, bloated, Hikaru Sulu and Hivar are able to entrap the creature. It then changes its radio transmission patterns into a wail, essentially a distress signal to others of its kind.

During the return trip, sensors pick up three or four significantly larger jawanda in pursuit. A shuttlecraft is rigged as a diversion to transmit louder distress signals, but their captive simply amplifies its own calls in response. As the Enterprise nears the gravity well of a star, the red giant NGC 7332, they detect a jawanda approaching at close to warp 10 with a diameter of more than 100 Earths, large enough to engulf Sol. It nearly catches them, but the Enterprise reaches the gravity well first and it is forced to turn away at the last moment.

Resigned to its fate, the captured jawanda ceases its distress calls during the trip to Lactra, and it is placed in a polar orbit around Lactra VII. The Enterprise then returns with Hivar and returns the six Boqu moons around Boqu II.

Details unique to the novelization

Details unique to the script 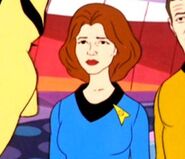