The Face of the Unknown

The Face of the Unknown

5361.7
The Face of the Unknown is a Star Trek: The Original Series novel by Christopher L. Bennett, and was published on 27 December 2016.

Investigating a series of violent raids by a mysterious predatory species, Captain James T. Kirk discovers that these events share a startling connection with the First Federation, a friendly but secretive civilization contacted early in the USS Enterprise's five-year mission. Traveling to the First Federation in search of answers, the Enterprise suddenly comes under attack from these strange marauders. Seeking refuge, the starship finds its way to the true home of the First Federation, an astonishing collection of worlds hidden from the galaxy beyond. The inhabitants of this isolated realm are wary of outsiders, and some accuse Kirk and his crew for bringing the wrath of their ancient enemy down upon them. When an attempt to stave off disaster goes tragically wrong, Kirk is held fully accountable, and Commander Spock learns there are even deeper forces that threaten this civilization. If Kirk and Spock cannot convince the First Federation's leaders to overcome their fears, the resulting catastrophe could doom them all!

Captain’s Log, Stardate 5361.7.
Two days have now passed since our discovery of the Betelgeusians’ mysterious attackers and their apparent connection to the reclusive civilization calling itself the First Federation. In the interim, we have received reports of similar attacks on a Saurian transport and an Arcturian trading post, both of which were able to repel the assaults—though not without casualties in the latter case. Whoever these beings are, they seem to be targeting races capable of putting up a fight ... and their own skill seems to be improving. As they draw nearer to Federation space, a confrontation with Starfleet increasingly appears inevitable.

The First Federation clearly has knowledge of these beings, but our attempts to contact Lieutenant David Bailey, our unofficial ambassador to the First Federation, have proven unsuccessful. The Enterprise is proceeding toward the First Federation border in hopes of establishing direct contact with their representatives. In the meantime, the office of the Federation diplomatic commissioner has requested a full briefing on the matter.

Captain’s Log, supplemental.
With no Dassik raids reported for more than a week, Ambassador Nisu well on her way to Earth aboard the Ulysses, and Commissioner Gopal’s belated approval of David Bailey’s official status as diplomatic liaison between the First Federation and the Dassik, I believe we can now put the Dassik crisis behind us at last. As for the Enterprise, Mister Scott’s teams and the repair crews of Starbase 8 have nearly completed the new upgrades to the bridge and main engineering, and the starbase engineers have been eager to study the gift provided to us by the First Federation, a holographic environment simulator for our recreation deck. While Lekur Zan assured us the technology was safe so long as it was properly used, the Starfleet Corps of Engineers is wary when it comes to untried alien technologies and will observe the Enterprise as a test bed before deciding whether it is safe to distribute the technology to other starships.
Now, with our upgrades and crew rotations completed, the Enterprise is ready to resume our mission of exploration. Unfortunately, we will soon be losing Ensign Chekov, who has requested a temporary ground transfer to undergo Starfleet security training and will be departing the ship at our next rendezvous. But his replacement, Lieutenant Arex Na Eth, comes highly recommended, and I am confident that he will fill the navigator’s seat ably until Chekov’s return. 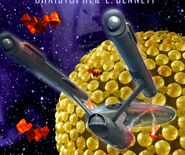