For other uses, see The Fallen.

A mysterious and enigmatic race of aliens reside within the Bajoran wormhole that have guided the development of the Bajoran people for centuries. To the people of Bajor, they are known as the Prophets and are worshiped as gods with their home in the wormhole being referred to as the Celestial Temple. Within their realm, they can see into the future and the past as both are the same to them. They are extraordinarily powerful but they are not the only ones of their kind.

Ancient Bajoran texts speak of another race of wormhole aliens known as the Pah-wraith who were banished from the Celestial Temple by the Prophets and entombed within the Fire Caves on Bajor. There they would remain for all of time. However, legends speak of the three Red Orbs of the Pah-Wraith that hold the key to their resurrection as well as the Restoration of Bajor but no signs of these forbidden artifacts have been found...

During the final days of the Occupation of Bajor, a Prefect known as Terrell had discovered one of the Red Orbs of the Pah-wraiths. Assigned with an armed guard, they studied the energy artifact in a secret research facility on Terok Nor in order to harness it as a weapon for the Cardassian Union. However, the Orb went out of control and caused a disruption in subspace that killed the guards and a scientist. The Cardassians abandoned the facility and sealed the lab just as the Federation were about to lay claim to the station. The lab would remain undisturbed for years.

By Stardate 51957.1, the USS Defiant received a distress call from the Bajoran science vessel Ke'el Tul. Captain Benjamin Sisko took a shuttle to investigate and tag the survivors with transport enhancers at which point a Grigari starship decloaked and attacked the Defiant. Chief Miles O'Brien was injured in the attack and Lieutenant Commander Worf worked to restore impulse power to the ship while fighting Grigari boarding parties. Once this was accomplished, the ship returned to Deep Space 9.

Major Kira Nerys, during this time, was meeting with an old friend from the Bajoran Resistance called Obanak Keelen who lived at a monastery on Bajor. Obanak had become the leader of the heretical Cult of the Pah-Wraiths who believed that the Pah-Wraith were the True Prophets of Bajor. They also advocated that the Prophets were false gods who had abandoned the Bajorans in their time of need. Obanak asked Kira to put pressure on the Vedek Assembly to allow the cult to explore an ancient temple on Bajor's moon of Jeraddo. The monastery was attacked at this point by the terrorist group known as the Kahl-taan who had been secretly sent by the Vedek Assembly to deal with the heretical cult. Communications were damaged while enemy troops were beamed into the monastery. Eventually, Kira managed to restore communications with her runabout and transport the cult members off the planet and return to Deep Space 9.

At this point, the Cardassian bodies from Terrell's laboratory are discovered, fused to the hull. Constable Odo was assigned to the investigation while Obanak recommended that the temple on Jeraddo be explored. Sisko, the Emissary of the Prophets, agreed and hoped to find answers some questions about the nightmares he had been having recently.

Sisko, Kira and Worf investigated the moon temple where they gathered numerous artifacts and were attacked by the Kahl-taan once more. They then discovered a mural at the temple and Worf took a holoimage of it with his tricorder for later analysis. When they returned to the station, they learned that the mural talks about the Red Orbs of the Pah-Wraith and mention of the wormhole but no connection is drawn at this point.

Recent news is received from the Cardassian Union who wish to send Dejar of the Carnellian Circle to investigate the dead bodies found; which are believed to be part of Gul Skrain Dukat's elite guard. It is concluded that the bodies were not fused into the hull by transporter beaming but rather by a spatial distortion. The abandoned Cardassian laboratory was discovered at this point. Captain Sisko takes Dejar into the lab but soon learns that Dejar is not who she claims to be and is actually the scientist Terrell who was assigned to study the Red Orb during the Cardassian Occupation. She manages to steal the Orb and escapes capture despite the actions of the Deep Space 9 crew.

Further analysis of the information the crew have gathered determines that the Red Orbs are the key for the Pah-Wraith's Ascension and are capable of forming a second wormhole. Its believed that Terrell is attempting to use the Orbs to create a weapon that would be capable of forming transient subspace ruptures which would make her a dangerous threat. In order to combat this threat, Starfleet authorizes the acquisition of another Red Orb to combat the one in Terrell's possession. It is learned that another of the Orbs is present on the USS Ulysses which had crashed on SR-III a few years earlier. The Defiant is dispatched on the mission but it is discovered that the ship had been sabotaged by Lieutenant Sulak, who was actually a Changeling. Once Worf and Sisko had recovered the Red Orb, the military forces of the Dominion captured them and send them to the concentration camp on Arduria. The Defiant is also boarded and captured with the crew sent to the prison camp. Sisko, Worf and Kira managed to escape their prison cells and recapture the Defiant as well as beam the crew back to the ship. They managed to return to Deep Space 9 with one of the Orbs.

In order to capture the Red Orb in Terrell's possession, Major Kira was disguised as a Cardassian scientist known as Alira Rejal and sent to the Cardassian military research base Hass'Terral. Kira managed to infiltrate the facility and sneak Captain Sisko along with Worf into the base; with the three of them managing to confront Terrel. Just as they reached her, Obanak beams into the base with a squad of Grigari shocktroopers. Terrell attempted to fight back against the invaders and was shot. Obanak reveals that he is the employer of the mercenary Grigari and plans to release the Pah-Wraiths by performing the Kosst'kiral fan amoyan. One of the Grigari collected the Red Orb as Obanak explained that a battalion of Grigari have already laid siege to the station and the group beamed away. Terrell, who is now dying, explains that the Red Orbs can be destroyed through the use of a focused Graviton beam which the Phasers can be modified to accomplish.

Sisko, Worf and Kira, armed with the knowledge on how to destroy the Orb, raced back to Deep Space 9 on the Defiant. There they found Grigari warships present and beaming boarding parties on the station. The three battled their way through them but found that they were too late and that Obanak had commenced the ritual with his followers in the laboratory. He then becomes possessed by the Pah-wraith and used his newly acquired power to injure the trio. However, they manage to force Obanak back into the wormhole, sealing him away with the Pah-wraith.

The ending shows Kira explaining that O'Brien and his engineering crew are working non-stop to repair the damage sustained on the station; which will take months to complete. She also shows some sadness over the loss of her friend Obanak and is worried that what would happen if someone truly evil used the power of the Pah-wraith. One who was not as nice as Obanak and would, thus, not be restrained in the damage they could inflict.... 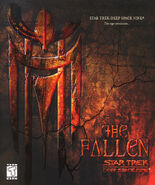 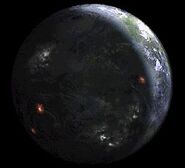 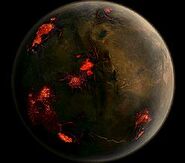 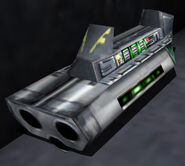 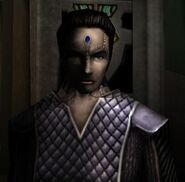