The Original Series No. 16

The Hand of Kahless

Klingon Captain Krenn is a ruthless war strategist. But on a mission to Earth, Krenn learns a lesson in peace.

Suddenly he must fight a secret battle of his own. His Empire has a covert plan to shatter the Federation. Only Krenn can prevent a war - at the risk of his own life!

Kirk witnesses many of the Enterprise crew returning from shore leave, having been affected by a new novel, The Final Reflection, which Starfleet insists is entirely fictional. McCoy gives Kirk a copy of the book to read.

The novel tells the story of a Klingon orphan named Vrenn, who after impressing in a game using real people as pieces was adopted by a Klingon admiral named Kethas. Vrenn eventually joined the Klingon Navy and provided a strategy to defeat a Romulan attack. Soon after, he was informed that Kethas had been involved in a plot to make a secret treaty with the Romulans. Kethas was executed but Vrenn was absolved and allowed to assume a new identity as a captain named Krenn.

Some years later, Krenn was sent to attend a Babel Conference on Earth and collect a new Federation ambassador, Emanuel Tagore. Along the way, he met Maxwell Grandisson III, the leader of the Back to Earth Movement who wanted humanity to leave the Federation and remain on Earth. On the return trip, Krenn's first officer Akhil attempted to assassinate Tagore but was stopped by Krenn and his childhood friend Gelly, now an Imperial Intelligence agent, who became Krenn's consort.

Krenn and his crew later took Tagore back to Earth on a diplomatic mission. Krenn had Zharn, another childhood friend now changed into a mind-wiped assassin, released from stasis and met with Thomas Jackson McCoy, the personal physician of Grandisson (and grandfather of Leonard). Soon after, Starfleet commander-in-chief Admiral Marcus van Diemen was murdered and Grandisson fell to his death in mysterious circumstances.

Krenn and Tagore met with new commander-in-chief Admiral Douglas Tancred Shepherd and Deneva representative Carter Winston where Krenn presented them with evidence that van Diemen had been deliberately ordering Federation ships to violate the Klingon Neutral Zone and be destroyed, feeling a mutual fear of the Klingons was keeping the Federation members together. Krenn sold the evidence in exchange for information on dilithium and antimatter that will allow the Klingons to enhance their engines and weapons.

Tagore was recalled but joined Krenn in destroying a Klingon taskforce sent to bombard a Federation colony. Krenn explained that the Klingons already had the information on dilithium and anti-matter, but now both the Federation and the Klingons would view the other as too powerful to attack. 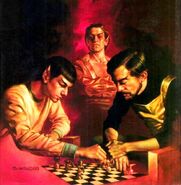