20:1:7
Prisoners of a powerful secret – FOR LIFE! — "The Final Truth" was a Star Trek: The Original Series comic book story published by Gold Key Comics in 1975. It was the 31st issue of their TOS series of comics, the 28th story illustrated by Alberto Giolitti and fourth of five written by John Warner.

The universe – laboratory of life! Countless mysteries, keys to creation itself, lie suspended in solution against a backdrop of stars. And the races that inhabit these stars, human or alien, will always seek the answers to those mysteries... although some answers may only come at great cost!

Ship's log: stardate 20:1:7, First Officer Spock in command! Myself and a small contingent have beamed down on Quodar, preparing for ceremonies admitting the planet into the Federation! Besides forming a strong cornerstone against the Klingons, Quodar is rich in dilithium crystals and triolium-L, a dilithium preservative! Both are essential to the warp-drive systems of our starships! T'Oell, Quodarian Secretary of Affairs, will meet us! Always in the spotlight, he sharply contrasts the Queen, Arama, who chooses to be reclusive!

Captain's log: supplemental! Spock has been sent ahead with the Enterprise to Quodar! The Vulcans long ago established diplomatic exchange with Quodar and Spock already is familiar with their customs! We will arrive at Quodar ourselves within the stellar hour…."

The sudden appearance of a cosmic storm disrupted the shuttle's instruments and guidance system, and it was drawn into the magnetic field of a nearby planet. It crashed onto the surface, but softly — the planet was covered in a thick layer of spongy moss. The group set out towards a concentration of nearby lifeforms.

Ship's log: stardate 20:1:8. Captain Kirk and the shuttle have not appeared… worried, I have been in touch with Starfleet…!

Data showed that the shuttle crashed on Quodar's neighboring planet Tristas. T'Oell explained that while they once had a scientific exchange with the advanced culture on Tristas, one day contact was inexplicably severed with a warning that intruders would be imprisoned.

Ship's log: supplemental. Secretary T'Oell has proved reluctant to take pleas for a thru-channels rescue to his queen, but with much insistence has at last agreed.

T'Oell changed his mind, prompting Spock to sneak into the queen's quarters for a private audience. Arama turned out to be half-Vulcan: her father had been Vulcan's ambassador to Quodar. Although she could not officially send Spock to Tristas — potentially an act of war — she did not object when Spock stole a starscout, as it allowed him to act independently.

Captain's log: supplemental! As a result of a cosmic storm, our shuttlecraft has been stranded on Tristas! We have been made virtual slaves, enforced by punisher collars!

On Tristas, the Tristian Science Ministry captured the Starfleet officers, fitted them with shock collars and compelled them to pick moss. Nistra explained that they were serving "the life within", but would not elucidate, and when Kirk's group kept asking questions, robot guards segregated them. Although the Tristians seemed reverent, Kirk felt that whatever the Tristians were doing was not based on a theology. The next day, a frustrated Admiral Kahn quickly disposed of two robot sentries. They removed their collars, then Kahn searched for their shuttle, followed by Chekov and Manning, while Kirk and Chapel broke into the Ministry building and confronted Minister Tonar.

Tonor explained that Tristas' core was discovered to be hollow, like an egg, filled with a vast field of life energy. Contact with the energy field merged six scientists into a powerful group consciousness called The Presence. A portal called The Eye was built, which let The Presence project their minds outward through the galaxy, but also allowed Tristians access to the interior. The Science Ministry chose to isolate Tristas to keep their discoveries from being controlled or destroyed. Kirk offered Federation protection in exchange for sharing their knowledge with the rest of the galaxy.

While searching for the shuttle, Kahn felt compelled to open a metal door. It was the entrance to The Eye, and as he appeared to fall into it, it expanded his thought processes. The Presence hoped the brief exposure would not permanently harm him. Kahn was visibly shaken by the experience.

Spock arrived on Tristas, found Manning and Chekov looking for Kahn, and rejoined Kirk. Together, they all returned to Quodor for the ceremonies. Kahn mentioned to Kirk that he was considering a transfer to work with the Tristians.

Captain's log: Personal. Admiral Kahn admits his mind pushed into his subconscious most of what he saw when he stumbled into The Eye, but I observe he is indeed a changed person! Other than that, the universe seems frustratingly unchanged in view of making what could be humanity's greatest discovery! I don't know what Kahn saw in that "Eye" — but I envy him for having seen it! 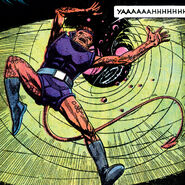 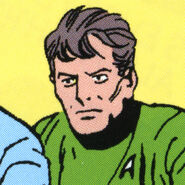 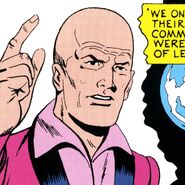 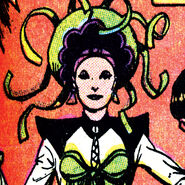 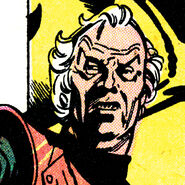 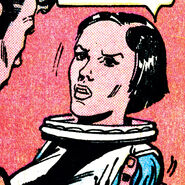