The Best of Star Trek

5995.7 - 6000.0
The Final Mission! — "The Final Voyage" was the second TOS annual published by DC Comics during their first series. Released in September 1986, it was written by Mike W. Barr and inked by Bob Smith. This story about the end of the USS Enterprise's five-year mission followed the previous annual's first mission, "All Those Years Ago...". This was the sole Star Trek story pencilled by Dan Jurgens.

Revealed at last: The final mission of the Enterprise.

Captain's log, USS Enterprise, stardate 5996.5.
On a charting mission on the outer rim of our sector, we await word from Starfleet Command — a message crucial to the crew and well-being of the Enterprise.

Captain's log, stardate 5997.7.
Our return to Earth has been delayed by the necessity of a short stopover at Starbase 10, to pick up the officer assigned to oversee the Enterprise during her refitting. I am of course anxious to meet this officer, and Mr. Scott plans to pick up some new hologram tapes for the ship's recreation room.

Captain's log, supplemental.
With our errands at Starbase 10 completed, we are heading for Earth at maximum warp. Despite our speed, however, with Commander Decker aboard, it promises to be a long trip.

Captain's log, supplemental.
I have begun to introduce Commander Decker to the Enterprise crew. I'm afraid he won't make this easy for himself, but I must bear in mind Dr. McCoy's earlier advice.

Captain's log, supplemental.
The crew's anticipation at returning home can barely be contained. Tonight, Mr. Spock has the conn, so Engineer Scott, Dr. McCoy and myself may continue an ancient Starfleet custom, dating back to old Earth... the "initiation" of crewmen who are returning from their first deep-space tours of duty.

Captain's log, stardate 5998.9.
In an attempt to learn how the Enterprise could have been surrounded by three Klingon warships, I have ordered a full sensor scan... and find myself confronted by another mystery!

Talos IV! The only planet in the known galaxy proscribed under General Order 7… the only remaining death penalty in Starfleet law!

Captain's log, supplemental.
If the Klingons have found a way to harness the Talosians' illusory powers, it could spell disaster for the Federation. Spock's own mental abilities may prove valuable if such is the case… but I can also sense his concern for his former commander, Captain Christopher Pike, one of the only two Human residents of this planet!

Captain's log, supplemental.
Working frantically, trying to complete our task before the Klingons discover our absence, I have assisted Dr. McCoy in the concoction of a special formula...

Captain's log, supplemental.
The Klingon warships have been disabled, and Starfleet notified. Mr. Spock has freed the captive Talosians, who have regained control of their planet.

Captain's log, stardate 5999.9.
We are nearing Earth, awaiting docking instructions from Starfleet. I wonder if Earth has changed very much in the years away, if —

Captain's log, stardate 6000.0.
We are home... and I find the pleasure of homecoming mingled with the pain of saying good-bye.

Is McCoy right? Will I stagnate behind an admiral's desk? I don't think so... Still, perhaps the most important part of my life has been spent aboard this ship. It is difficult to believe that I will never captain her again... Perhaps this is not an end, after all, but rather, a beginning.

Set near Prime Directive, Black Fire and The Lost Years.

Other "final mission" stories appeared in: 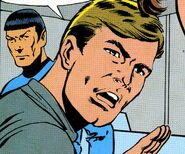 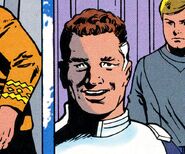 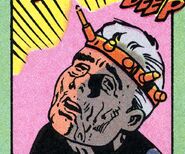 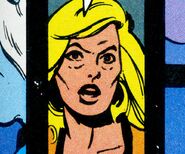 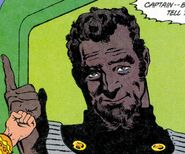 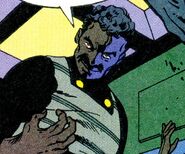 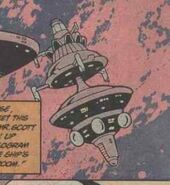 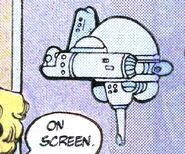 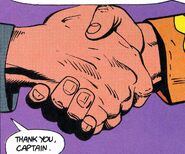