259.9
Pike & Kaaj... Mortal Enemies! — "The Flat, Gold Forever" is a TOS comic published by Marvel-Paramount Comics in 1997, the seventh issue in the Star Trek: Early Voyages series, set during Christopher Pike's captaincy of the USS Enterprise.

Captain Pike faces the wrath of Kaaj, the killer Klingon!

A flaming Icarus falls from the sky. On the planet Prairie, the crew of the Harvester rig Rostok witness the Starfleet shuttlecraft plummet into their fields. The crew scramble, preparing fire control procedures to rescue their crops, their leader Claire Thorn takes a Skimmer to check for survivors. She finds Christopher Pike and reassures him he's ok, he disagrees.

On the IKS Varchas Commander Kaaj demands to know what happened, the Klingons had planned to disable Pike's shuttle and tractor him in, to a painful end. Instead they lost him, Virka lays blame on Kolj, costing the other Klingon his life, but saving that of Kir, who then reports he has detected a plasma trail from the shuttle, leading to the fourth planet in the system; they set course.

Ship's log, stardate 259.9, First Officer reporting: The Enterprise has spent a week at Deep Space Station K-12 to conduct overhaul and repairs after the recent mauling we took at Darrien 224. The Captain has been unexpectedly recalled to Earth on urgent family business and I have been left to supervise upgrades...

On the bridge of the Enterprise Nano puts an incoming message from Admiral Mahirn on screen. Number One greets the admiral reassuring him Captain Pike is en route to Earth and expressing concern as to the Captain's father's condition. The admiral has no idea what she is talking about...

On Prairie the crew of the Rostok bicker about what to do with Pike, concerned from his delirious murmurings that he could have brought unwanted company with him. A recovered Pike joins the discussion, introducing himself and requesting use of a com unit. Thorn explains, with an air of resentment towards Starfleet, that the Rostok doesn't have com devices with enough range to contact Starfleet. One of the other crew suggests Pike try another harvester that does have a long range com unit, however just at the moment the crew spot a plume of smoke on the horizon. Through her binoculars Thorn watches as Klingons butcher the other harvesters crew, drawn there by the com signal.

Knowing he is responsible Pike concludes he must get away before anyone else is made a victim, but he is too late, a Klingon assault squad arrives on the Rostok. The leader of the squad contacts Kaaj to report his success. Kaaj informs Pike he will watch the harvester crew die before he is beamed aboard to meet his own end.

Pike resists, and Thorn joins him, revealing her training as a former Starfleet officer - having left the fleet after her ship was destroyed by the Chakuun. Pike takes a skimmer whilst Thorn vows to take one to the other harvester to see if she can salvage the com unit, but just as Pike departs a Klingon knocks Thorn unconscious. The Klingon party reports on Pike's departure and Kaaj sends another squad to intercept him.

Pike's skimmer comes under disruptor fire from Klingons in the fields, and Pike tumbles out as his vehicle crashes into the corn. The leader of the Klingon party, Toth, reports Pike is down but hand scanners aren’t functioning properly. Kaaj orders Virka to target the Varchas's phasers on Toth's location, determined to kill Pike no matter the cost.

The phaser beams incinerate the field and vaporizes the Klingons, but Pike just manages to clear the firing zone.

Above, as Kaaj enjoys Pike's torment, the Enterprise enters the system, phasers blasting. The Varchas's shields and weapons are taken out in the first barrage, begrudgingly Kaaj orders the ship to warp to safety.

Captain's log, supplemental: The crop fires on Prairie have been contained, and full medical aid rendered. That seems all we can do, as the farmers of Prairie want nothing else from use except our departure. Claire Thorn is in our Sickbay. I think she came to Prairie looking for something when all she needed was to lay to rest a painful memory. I'm backing her bid to be reinstated in Starfleet. She deserves a second chance. Now all that remains to be dealt with is a mystery...

In the observation lounge Number One reveals to Pike how they found him. Having realized Pike's recall to Earth was a fake they attempted to trace it back to source, but it was to degraded. Instead they received a screened untraceable transmission informing them of Pike's location. Pike had a friend, or Kaaj had another enemy... 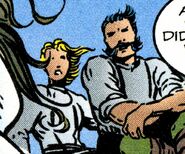