For other uses, see Gemini.

In The Gemini Agent, as first-year final exams week kicks off, several incident reports with serious allegations against James T. Kirk end up on the Commandant of Midshipmen's desk. None of the allegations are true, of course... or are they? Kirk is being plagued by mysterious blackout periods, so he finds the allegations difficult to refute. During these blackout periods, he has no recollection of what he did, save for some very disturbing and disjointed memories. Kirk needs his friends, Bones and Uhura to help prove his innocence. Who is targeting Kirk, and why is he being targeted? And how far are they willing to go? Someone close to Kirk holds the answers to all of these questions, but can he put the pieces together before it's too late?

On Romulus, the scientist Nverinn tr'Rehu is informed by Senator Tashal that the Gemini Project has been approved, but with one condition imposed by the Tal Shiar: once the agent has completed its mission, it must be terminated. At Starfleet Academy, Spock assigns Cadet Nyota Uhura the task of analyzing combat recordings from the Earth-Romulan War to gain insight into the Romulan mindset. While discussing the upcoming Zeta Fleet Training Exercise, James T. Kirk and Leonard McCoy get into a fight with four cadets who sent a small insect-like device toward them as a "dead week" prank. Uhura meets T'Laya, a Vulcan cadet with an unusual background that has made her much more emotionally open than most Vulcans. Uhura and T'Laya see Kirk and McCoy fighting the other cadets outside, and leave the lab to intervene.

Tashal visits Nverinn at his research institute in the Valley of Chula. They are joined by a young girl named Majal, the sister of the Gemini agent, whom Nverinn is raising as his daughter. Tashal warns Nverinn that he will be declared a rogue scientist guilty of treason if Gemini goes wrong. Kirk regains consciousness in a flower bed, where he is found by Lieutenant Samarra Caan of Starfleet Intelligence. In the ICU at Starfleet Medical College, Kirk learns from McCoy, Uhura and T'Laya that the four of them had gone for a drink after the fight, but that Kirk started behaving erratically and disappeared; Kirk has a six-hour gap in his memory. Later that evening, Caan visits McCoy and requests Kirk's medical records. She explains that hundreds of database search requests have been traced to Kirk's account on the subject of Kirk himself. Kirk dreams that he is back at the quarry in Iowa with his brother, Sam, who warns him, "They're coming for you."

Cadet Pavel Chekov nearly drowns when the door of his room locks shut and the sprinkler system activates. A video appears on his computer screen showing a male cadet who calls himself a "quarry rat". Chekov finally succeeds in overriding and opening his door with the assistance of his neighbor, Cadet Alex Leigh. Leigh's roommate, an Andorian zhen named Salla zh'Tran, uses the kill switch concealed in Chekov's desk to turn off the spinklers. T'Laya tells Kirk that other cadets are jealous of him and think he cheats. Lieutenant Caan informs Kirk that he has been charged with fifteen violations of the Cadet Honor Code. Kirk is escorted to Vice Admiral Tullsey's office.

Uhura asks Spock about the Zeta ship assignments; Spock informs her that she has already been assigned to the communications station on the Farragut's bridge. In Admiral Tullsey's office, Tullsey and Caan tell Kirk about the incident in Chekov's room. Caan shows Kirk the recording of the message Chekov received during the incident, which seems to depict Kirk himself. Caan asks if the message contains information only Kirk would know, but Tullsey suggests that Kirk not answer that question yet. Uhura and Spock eat lunch at the faculty dining hall, where Spock tells Uhura about the likelihood that the Romulans are descendants of Vulcan separatists and that there are Vulcans who support reunification.

Via a scrambled data transmission, Nverinn reminds Gemini of the primary objective: to gather information on James Kirk. Kirk, McCoy, Uhura and T'Laya plan a search of the Academy campus for people who may have seen Kirk during the six hours he was missing. Kirk suggests that McCoy visit Caan to see the video Chekov received. Kirk visits Chekov, who has been investigating the computer agent that attacked his room. Back at the Medical College, McCoy informs Kirk that he has been grounded and will be unable to take part in Zeta. Kirk is feeling ill again, and McCoy sends him back to the ICU. At the urging of a mysterious voice, Kirk slips out of the Medical College. McCoy has secretly asked Caan to put Kirk under protective surveillance; her superiors plan to let Kirk lead them to the culprit, but Kirk eludes the Intelligence personnel in the maintenance culverts near San Francisco National Cemetery. Kirk sees a bright green line leading him through the tunnels. With difficulty he climbs up the exit pipe, above which the constellation Gemini is shining, and emerges in National Cemetery, where Lieutenant Caan stuns him with her phaser.

Spock tells Uhura that Starfleet Intelligence has detected subspace transmissions from Earth into the Romulan Neutral Zone. Kirk awakens in the ICU again and tells McCoy and Caan about the green line he saw. McCoy explains that scans of Kirk's brain showed unusual metabolic activity in the Heschl's Gyrus and the visual cortex. Kirk is no longer grounded, but his medical condition prevents him from being assigned a captaincy for Zeta; he is assigned as first officer of the Farragut under the command of his nemesis, Cadet Viktor Tikhonov, and will be under observation by Lieutenant Caan.

Kirk spends the week leading up to Zeta studying for final exams and unwinding in the company of T'Laya. The night before Zeta, T'Laya, who seems unusually emotional, urges Kirk to do what his heart tells him the following day. The objective of Tikhonov's flotilla, Task Force Blue, is to scuttle Starbase Zeta, an abandoned mining facility orbiting Titan. During the exercise, Kirk detects an approaching Romulan ship and hears T'Laya's voice in his head, telling him to come to the transporter bay. At T'Laya's urging, Kirk advises Tikhonov to resolve the Zeta scenario with diplomacy. As she prepares to transport off the Farragut to the Romulan ship, T'Laya, who is Gemini, gives Kirk a data cube which will explain her actions. Caan arrives and points her phaser at T'Laya, but backs off when T'Laya makes the sign of the Jolan Movement, a Romulan peace group. T'Laya transports away.

Senator Tashal and the Romulan Praetor view a recorded message from Nverinn explaining that he is now a fugitive from the Tal Shiar. T'Laya will shortly rejoin Nverinn and Majal, her sister. Nverinn, who hopes the reunification movement will eventually join the Jolan movement, has agents still active in the Military High Command and Tal Shiar. From T'Laya's data cube, Kirk now understands that the objective of Gemini was to create a digital duplicate of himself. T'Laya had attempted to create a compulsion in Kirk to seek peaceful solutions to conflict, only to realize that such a compulsion already existed in him. Chekov asks Kirk about the first time he kissed a girl. 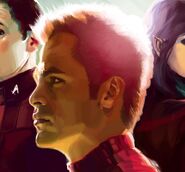 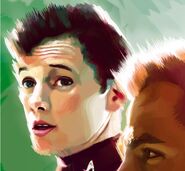 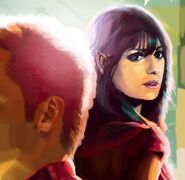