2606.4
Captain Kirk and Mr. Spock save a planet from extinction, but are doomed by its war-mad leaders! – "The Ghost Planet" was the fifth issue of the TOS Gold Key Comics series. Published in September 1969, it was notable for being the first American story released after the original televised run of the series. It was the fifth story written by Dick Wood and the third drawn by Alberto Giolitti. The story reran in issue 37 in May 1976 with a new painted cover.

High above the strange unpopulated world the crew of the star ship Enterprise battle to save a doomed planet ... but they cannot know of the fate that awaits them once they succeed!

Captain's log, stardate 26:06.4. Enterprise moving deep into galaxy Zelta… We have sighted a strange ringed area… it may conceal a planet… investigation under way…

Spock discovers that the rainbow-colored rings are composed of copper and are circulating around a planet. Investigating, the Enterprise discovers high levels of radiation and a deserted city. Kirk, Spock, Denton and another crewman beam down to the surface, where an automated voice welcomes them and a robot-controlled vehicle arrives to pick them up. It takes them through the ruined city to the central communications building, where Justin I and Justin II, the rulers of the planet, communicate with them over a viewscreen. They explain that the planet's natives were forced to leave after the radioactive rings formed around their planet. Two artificial satellites were constructed to house them, but they are now overpopulated, and with no way to construct more satellites or destroy the rings, the Justins ask Kirk for help. Spock says that destroying the rings is possible, but he will need time to make the calculations. The Justins thank the landing party and sign off.

However, Spock wonders to Kirk why two satellites were built, and the other two crewmen find a room guarded by robots which react with hostility when they try to enter it. After disabling the robots, Kirk and Spock enter and discover evidence that the Justins had been fighting a war against each other in which more than 500,000 were killed, and only stopped when the rings forced them to call a truce. Realizing that the war will resume after the rings are destroyed, Kirk confronts the Justins on the Enterprise. They insist that there are no weapons left, and suggest that the Enterprise leave visual detectors on the planet to observe them and ensure that no weapons are ever produced again, to which Kirk agrees.

The Enterprise succeeds in destroying the rings, and a landing party transports down to test the surface for radiation. While there, they discover a stockpile of nuclear weapons belonging to the Justins, proving that they had been lied to again. The two rulers come down to the planet and attack the landing party while jamming the transporter, preventing them from beaming away. Spock contacts McCoy and has him play films made of the rings in the planet's atmosphere, making it look like the rings have returned. Convinced that the Enterprise can bring back the rings at any time, the Justins stop fighting and agree to let their weapons be destroyed.

Justins I and II. 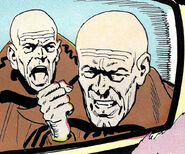 Justin I and Justin II. 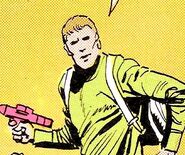 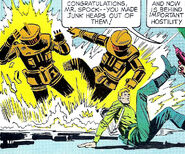 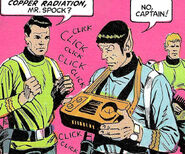