The Gods Have Come!

The Gods Have Come!

32-19-25
"The Gods Have Come!" was a five-page Star Trek: The Original Series comic strip published in 1977. It was the tenth of 11 annual stories from the UK comic strips series and was printed in the United Kingdom in Mighty TV Comic Annual 1978. In this story, Kirk and Spock try to rescue warring races near an active volcano.

Omnibus teaser
The Enterprise picks up strange sounds coming from volcanic planet Alpha 332, where Kirk and Spock impose peace on a pair of warring tribes, the humanoid Parracas and the simian Turracas.

Captain's log – stardate 32-19-25. The Enterprise is moving through the edge of Galaxy 517. This is unexplored territory and my orders are to proceed with caution…"

Unusual voices are detected by Nyota Uhura which Spock traces to an active volcano on a nearby planet. Uhura provides Kirk and Spock with a bearing, and they beam down to investigate. Through smoky, sulfurous gases they find a group of humanoid Parracas led by Maracu who are praying to the volcano. She interprets Kirk and Spock as messengers of the volcano, and through telepathy with Spock explains that they are praying for an end to war with their neighbors. Montgomery Scott radios that the volcano can blow at any moment. She heeds Spock's warning — her people pack their belongings and head away from their village down the mountainside toward a valley.

Kirk and Spock ride on saddled Parraca beasts toward the other side of the volcano, but are captured by ape-like warrior Turracas led by Turr. They are also telepathically receptive to Spock, but Turr refuses to believe Spock's warning about the volcano. Turr decides to sacrifice Kirk and Spock to the mountain. Before Turr can toss them into the boiling lava, Scott beams them back to the ship. The Turracas are spooked by the transporter effect and start to flee, just as the volcano erupts. Aboard the Enterprise, Kirk is glad that at least one of the two races will survive. 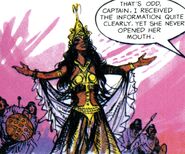 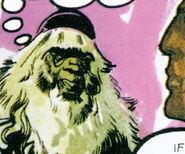 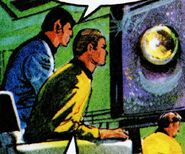