The Hand of the Assassin!

The Hand of the Assassin

The Next Generation No. 13

43423.6
Hand of the assassin! - O'Brien is possessed telepathically, and forced to act out a plan to use the transporter to kill a queen.

At the planet Domakleion, members of the USS Enterprise-D's senior staff attend a peace treaty negotiation in the observation lounge, under strict security protocols. The telepathic representatives of the Domak race are negotiating the future of their planet, under contested leadership by the two heirs of the last ruling queen. The security procedures are necessary because of an innate ability of the Domaks to telepathically control other beings. To protect against all possible wrongdoing, Captain Picard has ordered all weapons removed from the proceedings, and a squad of security to watch both the representatives and the Enterprise officers for any signs of tampering. Furthermore, Counselor Troi is present, monitoring both the guards and the attendees for signs of telepathic contact. While the negotiations begin amicably, not much progress is made during the first session.

Meanwhile, Chief Petty Officer Miles O'Brien is finishing his shift working the transporter. He comments to his replacement that he was glad the Domak parties were beamed up separately, so as to avoid bloodshed in the transporter room.

Upon leaving the transporter room, O'Brien is paralyzed in the corridor. He is disoriented as one of the Domak retinues, Zadeus, enters his mind and begins the process of taking control of the transporter chief's personality. O'Brien struggles, and Zadeus telepathically begins to explain his plan to destroy one of the two queens.

The conference breaks for the day as the respective parties return to their quarters until the recess ends. Zadeus, to avoid suspicion, sends O'Brien to ten-forward so he can make it appear as the chief is taking part in a normal evening's social activities. William Riker finds O'Brien in the lounge and chides him for forgetting the weekly poker game. Although momentarily caught off guard, Zadeus is able to push O'Brien to claim that he was simply bowing out to give someone else the chance to win for a change. O'Brien and Riker proceed to Riker's quarters for the game of cards.

See also: Captain's log, USS Enterprise (NCC-1701-D), 2366
Captain's log, stardate 43423.6
Both Domak queens-apparent have beamed aboard without incident. It is more than I might have hoped. After all, these same two sisters have been at each other's throats for six bloody months now, vying for the throne of Domakleion in the wake of their mother's death. Under its former queen, Domakleion was a staunch ally of the Federation. It can be a staunch ally again. However, if this bitter war for succession goes on as it has, the Domaks will destroy themselves. To help Domakleion steer clear of self-destruction, the Federation has offered the Enterprise as a neutral venue—in which peace talks may proceed without distraction. Naturally, no weapons have been allowed at these proceedings. Even without daggers or disruptors, the Domaks are far from harmless. Being a highly telepathic people, they are capable of influencing others to do their bidding. Particularly those of other races, who have had no such experience with such manipulation. In short, I fear that one of our guests may attempt to use us to resolve their differences—and in a somewhat bloodier way than the Federation has in mind. To prevent Commander Riker and myself from being used as mind pawns in any Domak game of assassination, I have arranged for Lieutenant Worf to have us watched as closely as the queens-apparent and their retinues. If we even approach a phaser, we are to be confined to our quarters. Of course, Worf's security people are themselves vulnerable to Domak manipulation. As a result, they have been ordered to operate without phasers. However, security officers are capable of doing damage without weapons. So I have taken a further step to avoid violence—by asking Counselor Troi to monitor the security contingent. Thanks to her special abilities, she will be able to tell if any of Worf's people have been tampered with—and sound alarm before they can do any harm. However, even with all this preparation, I feel uneasy. When dealing with telepaths as powerful as the Domaks, complacency can lead to disaster. I can only hope we have been careful enough. 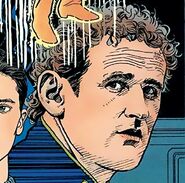 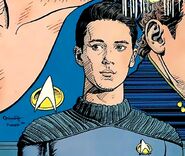 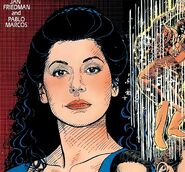 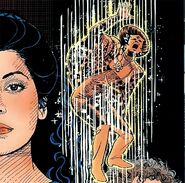 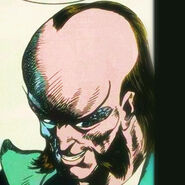 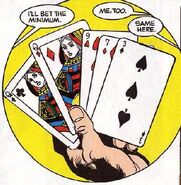