2492.5
Turn back or die – But the Enterprise crew is determined to explore the Haunted Asteroid

"The Haunted Asteroid" was a Star Trek comic book story published by Gold Key Comics in 1973, the 19th issue of their TOS series. It was the 17th story drawn by Alberto Giolitti and the third written by Arnold Drake.

In this story, the USS Enterprise investigated a mausoleum reputed to be haunted.

Emperor Muro III had a robot army carve an entire asteroid into a memorial to his dead bride! But the jewel-encrusted, orbiting mausoleum became a thing of supernatural dread! And the grave-robbers of space who defied that haunted world either disappeared or returned too mad to tell its sinister secrets!

Captain's Log, Stardate 2492.5: We are approaching the small but celebrated asteroid Mila Xa, in the thin outer-reaches of the asteroid belt of star system Delta. I have called an orientation briefing...

Senior scientist Krisp briefs the crew about Saeena's tomb, built circa 1669 by her husband, emperor Muro III. The site is purportedly haunted, with 319 people said to have disappeared while attempting to rob the tomb. Starfleet has assigned Krisp and the USS Enterprise to get to the bottom of the mystery. Investigator Jay Nordyke had been sent in first, spending four days on Mila Xa before landing his ship in the hangar bay. He describes nothing out of the ordinary, but Krisp and Kirk both realize Nordyke has omitted a day from his report. Under psycho-probe, frightening memories emerge and Nordyke becomes agitated, but he can provide no useful explanations.

James T. Kirk, Krisp, Leonard McCoy, Montgomery Scott, Spock and Hikaru Sulu beam down to investigate. Projections of three ghostly witches warn the officers to leave. They camp overnight, but Scott and McCoy disappear less than two hours later. The rest split up to search. Over the communicator, Spock reports seeing zombies, then contact is lost, leaving Kirk and Krisp to track down their missing crewmates. When they are not deterred by an eerie projection of Saeena, they are gassed by zombie robots and deposited in a dungeon full of human skeletons.

Captain's log, stardate 24:92.7. That strange world of apparitions and walking-dead has swallowed up four of my crew – and four of the best friends I have ever known! They will be found alive, or whatever foul thing that lies behind it all will be made to pay!

Krisp determines the skeletons are intact and more than a century old. She and Kirk locate the missing officers in a locked cell and blast it open with a miniature explosive hidden in a button on Kirk's uniform. Together they locate an elevator shaft, retrieve an old elevator car, and descend six miles below the terraformed surface into a subterranean section of the tomb. They find environmental and security systems, then make an unexpected discovery: Saeena is there, still alive.

Saeena explains that she had been born a mutant with extraordinary healing factors and an unusually long life-span. To keep her from becoming a spectacle, her husband faked her death, then rebuilt their royal asteroid hideaway into a palace where the two could live out their lives together in secret. Once the mausoleum was finished, Muro III mysteriously disappeared and rejoined his wife. He died there at age 84, in the 17th century, while Saeena lived on, protected by the asteroid's defenses. She says that, while, any intruders are not allowed to leave, they are able to live contented lives in the paradise built on the asteroid, and she has a similar fate planned for the landing party. However, the asteroid is set to automatically self-destruct upon her death, and she is at death's door. The group flees, evading zombie robots to get back to the beam-down point, and watch the asteroid explode from the bridge of the Enterprise.

circa 1666
On her wedding day, Saeena was found to be a mutant with an extended lifespan, prompting Muro III to begin building a hideaway on an asteroid.
circa 1669
Muro III reportedly disappeared on a space expedition that year, but instead joined Saeena on the asteroid.
Between 1716 and 1766
Muro III died of old age, aged 84. 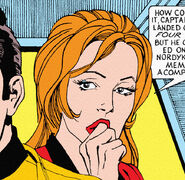 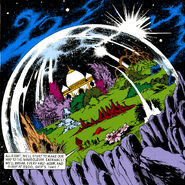 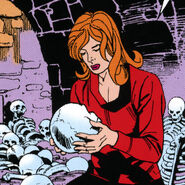 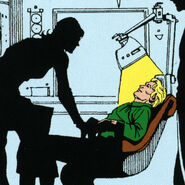 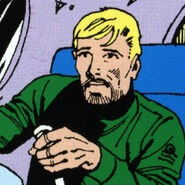 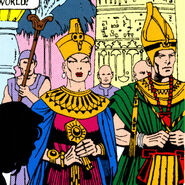 Wedding of Saeena and Muro. 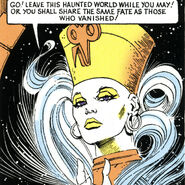 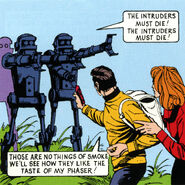 Zombie robots vs. Kirk and Krisp.