The Haunting of Thallus!

The Haunting of Thallus!

The Original Series (Marvel TOS) No. 4

7416.2
The starship Enterprise's weirdest voyage! – "The Haunting of Thallus!" was the fourth issue of Marvel Comics' 1980 series of Star Trek comics. The issue was written and edited by Marv Wolfman. The art was penciled by Dave Cockrum and inked by Klaus Janson, with Jim Shooter credited as consulting editor. This story was the first part of a 2 issue storyline.

Captain's log, stardate 7416.2: Our shakedown mission having proven successful, Mr. Spock and I have been ordered to appear before Admiral Fitzpatrick for our first new assignment...

At Starfleet Headquarters in San Francisco, Fitzpatrick informs Kirk that he will be transporting Raytag M'Gora, an escaped Normedian prisoner who has been certified insane, and Federation Ambassador R'Kgg to Thallus, the planet from which Raytag escaped. When Janice Rand beams Raytag aboard, he breaks his restraints, grabs a phaser from one security guard and shoots another. He escapes into Engineering, where he taunts the crew with his eyeless species' ability to "see" with sonar. Kirk shoots the phaser out of his hand, but he lashes back at Kirk with his tail.

Captain's log, 7416.3: Commander Scott has quickly jury-rigged an ultra-high frequency whistle to sound throughout the Enterprise. It is my hope that the ultra sonics, which we humans cannot hear, will prove jarringly painful to the Normedian... enough to disorient him and allow Mr. Spock to take certain actions of his own.

The whistle disables Raytag, and Spock renders him unconscious with the Vulcan nerve pinch.

Captain's log, stardate 7416.4: We are cruising just outside Klingon space. So far our sensors show no sign of any hostile forces. Aboard the Enterprise, all has been functioning smoothly. As expected, Ambassador R'Kgg has remained in his quarters. Sometimes I wish all Federation ambassadors were of Regulun temperament.

The Enterprise receives new coordinates from Thallus, giving a location a million kilometers from the planet. As Engineering Ensign Cyron Williams embraces his girlfriend, Lydia, in his quarters, they are attacked by a werewolf, which vanishes when Williams throws a bottle of Saurian brandy at it. Chekov and Sulu are in the rec room when a ghost appears, then disappears. In the brig, Raytag begs Kirk and R'Kgg not to take him back to Thallus; when Kirk is called to the bridge, R'Kgg remains to speak further with Raytag. The ship approaches the coordinates, where there is no planet. A creature claiming to be Dracula appears on the bridge, but turns into a bat, then a mist. He escapes into the elevator and thence to C-Deck, where he kills R'Kgg by puncturing his neck.

Captain's log, stardate 7417.7: The Federation has been informed of Ambassador R'Kgg's bizarre murder, and we have been ordered to proceed with caution. Since his murder, however, there have been no new reports of any manifestations.

The Enterprise approaches what appears to be a haunted house floating in space. A landing party including Kirk, Spock and McCoy beams inside the house, where there is a breathable atmosphere. Following a scream, they find the Frankenstein monster strangling a young woman. When phasers have no effect on the monster, Kirk kicks it out the window (resulting in no loss of atmosphere), but many more monsters appear around them. The young woman claims to have been held prisoner by the monsters. A group of Klingons appear with weapons drawn, their leader telling Kirk "there is no escape!"

A Klingon ship appears, and its commander claims the Enterprise has violated Klingon space. He says the landing party has been captured and demands that the Enterprise surrender. In the brig, Raytag begins laughing...

Captain's log, stardate 7417.4. The planet Thallus, lying just outside Klingon space, had sent word that it wished to join the Federation! Our mission was two fold: to return an escaped prisoner, the mad, blind Raytag M'Gora to Thallus and to escort the Federation Ambassador, R'Kgg, there as well. To our horror, the ambassador was killed by a being who appeared to be the mythical monster Dracula. Shortly afterwards other monsters were to infest the Enterprise… and when a haunted house appeared in space, a landing party was sent to investigate! – It found a collection of strange apparitions menacing a human girl! ... (Serialized reprint)

A landing party is set upon by monsters. 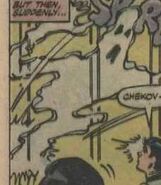 A haunted house near Thallus. 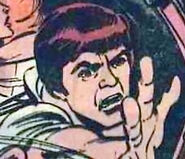 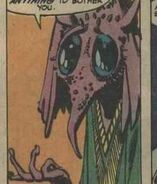 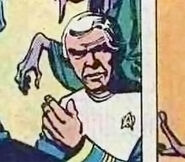