"The Humanitarian" is the third of four TOS manga stories from the 2008 anthology Uchu (Universe), published by TokyoPop, written by Luis Reyes, with art by Nate Watson and shading by Chow Hon Lam.

In this story, a peace mission went disastrously awry when a nuclear reactor blast killed 63 and wounded 57 of the crew. With Kirk off the ship and Spock in sole command, Spock had to contend with political and emotional turmoil, both for the crew and the war-torn planet's inhabitants.

Uchu back cover
Luis Reyes tries to glimpse the softer side of Spock.

Captain's Log, Stardate 3347.6.
First Officer Spock in Command. As Captain Kirk is recuperating on Starbase 47, the USS Enterprise has been ordered to the planet Rudimon for a remarkable mission of peace. Though once on the path to membership in the United Federation of Planets, Rudimon's internal political unrest drove them to sever all galactic ties. Now, seventy years later, the Federation has been asked to return and help a fledgling peace prosper. Our mission is to aid the people of this world by initiating a program to rebuild infrastructures weathered and torn by decades of war and neglect. It is a unique privilege. If I were human, I would most likely be bordering on excitement... if I were human.

Upon arriving, Spock meets with Governor Laisu and begins the massive mission, refitting equipment and training the populace on their first day. McCoy compliments Spock on his diplomacy. When Spock meets with his staff, Scotty reports an outdated warp core powering the city that should get a new casing. McCoy reports their hospitals are good but staff needs training. Lt. Labar Tique in security suggests implementing a system to inventory medical supplies. Petty Officer Harris says their educational materials are out of date but the system is good.

For Tique the mission is personal. His father was an early warp scientist from Rudimon who left after first contact then found himself unable to return when war started. His father died believing his world would never find peace, so Tique appreciates being on the mission.

Suddenly a massive explosion tears through the city.

Touring sickbay in the aftermath, Spock hears Leonard McCoy report 63 fatalities, 17 critically injured in sickbay and 40 more wounded crew still on the planet. McCoy says they need to go to Starbase 47 to treat everyone, as sickbay "wasn't built to handle so much carnage."

In Engineering, Montgomery Scott reports that a crude nuclear engine had blown up. He is unable to determine the reason for the explosion, whether it was intentionally set or if it had been forgotten over the years and whether age or the crew's movements had accidentally set it off.

As the crew prepares to evacuate to Starbase 47, Spock meditates in his quarters. McCoy brings two Saurian brandies, both for McCoy. Spock says he has no emotions to be affected, but nonetheless appears moved by the gesture and appreciates McCoy's company. Spock is reading an ancient Vulcan Book of Invocation to remind him that "even at the nadir of their development, we are at the core logical beings."

Spock and Tique visit the body of Laisu, who had been killed in the blast. Spock tells a local official that continuation of the mission is impossible with so many of the crew dead, but that the Federation will return soon. Lt. Tique reports the evacuation complete except for one security team. But as he is making his report, Tique is shot by a sniper and dies by the time they beam up.

Meeting with Kirk after arriving at Starbase 47, Spock suggests that Kirk might have found an alternative to aborting the mission, but Kirk commends Spock for his actions. 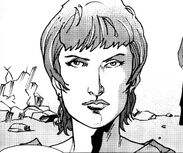 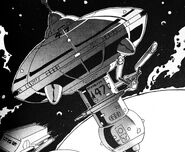 Rudimon's largest city.
Add a photo to this gallery

Retrieved from "https://memory-beta.fandom.com/wiki/The_Humanitarian?oldid=712730"
Community content is available under CC-BY-SA unless otherwise noted.