For other uses, see The Hunted.

Captain's Log, Stardate 6218.9: It has been three months since our encounters with a Romulan ship and an unidentified, hostile alien vessel. Our journey to Starbase Four was a slow ten-week cruise, which is all the ship's damaged systems could manage.
Chief Engineer Montgomery Scott has overseen two weeks of extensive repairs and even managed a few system upgrades. Thanks to Mister Scott, the Enterprise is in even better condition than before.
After these stressful weeks, I know the crew is looking forward to the routine of our next assignment, a scientific survey of a unique astronomical phenomenom. I'm still not clear about multistellar phasing, but Mister Spock is "fascinated" about the phenomenon. Doctor McCoy claims that Spock's enthusiasm is a sure sign that the mission will be excruciatingly dull. I can only hope that he is right.

Captain's Log, Supplemental : We are returning to Federation space. Though the Enterprise is in good condition the situation is grave. 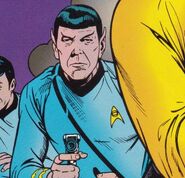 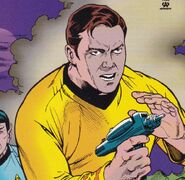 James T. Kirk.
Add a photo to this gallery

Retrieved from "https://memory-beta.fandom.com/wiki/The_Hunted_(TOS_comic)?oldid=676530"
Community content is available under CC-BY-SA unless otherwise noted.