The Next Generation No. 11

Captain's log, stardate 43269.3
Having rushed to the Alpha Sarpeidon sector with all possible speed, we find that we are nonetheless too late. The bogus Enterprise, whose presence drew us here in the first place, has vanished without a trace. However, it has left grim evidence of its passage -- the debris that was once the U.S.S. Merrimac and her crew of six hundred and forty. This is one massacre that Starfleet cannon blame on my ship -- or on myself, for that matter -- as we were orbiting Starbase 104 when the mystery ship was first sighted in this vicinity. However, there is much more at stake here than my own reputation. The false Enterprise and those who pilote her have proven themselves capable of violence in the extreme. More than a thousand people have died already at their hands. It is absolutely imperative that we find this impostor -- and stop her before she can repeat this crime again. 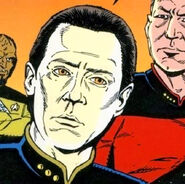 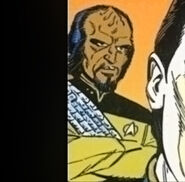 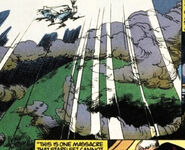 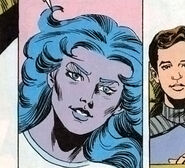