"The Infinite Vulcan" was the seventh episode of Star Trek: The Animated Series. It was produced in TAS' first season and debuted on 20 October 1973. The episode was directed by Hal Sutherland and written by Walter Koenig. It was the sixth episode to be novelized by Alan Dean Foster, appearing in Star Trek: Log Two in August 1974.

In this story, a giant clone is made of Spock.

VHS teaser
A 20th century scientist who has lived for 200 years by cloning himself has the same plan for Mr. Spock. "The Infinite Vulcan" was actually written by Walter Koenig (Ensign Chekov).

The USS Enterprise explores the planet Phylos. Here they find the Phylosians and a giant fifth clone of an Augment scientist named Stavos Keniclius. Spock is kidnapped by Swoopers. After being misled many, many times, James T. Kirk discovers the nefarious plot involves cloning a giant army of Spock clones to impose peace in the galaxy. The first Spock clone, Spock 2 convinces the giant Stavos Keniclius 5 that the United Federation of Planets already has enough peace to go around. Spock 2 then agrees to stay on Phylos to help the Phylosians, thus averting interstellar issues.

Captain's log, stardate 5503.1. Escort of the Carson's World/Bethulia ore shipment having been assigned to other vessels, the Enterprise has been ordered to survey a new planet recently discovered at the Federation galactic fringe. (Novelization)

Captain's log, stardate 5554.4. The Enterprise has been ordered to survey a new planet recently discovered at the periphery of the galaxy.

Captain's log, stardate 5554.8. We have come upon one of the most fascinating discoveries we have ever seen. Plant life of extraordinary intelligence and technology. However, they have captured Mr. Spock, apparently under the orders of a human named Keniclius. Lieutenant Uhura is trying to locate any reference to such a man in order to unravel the mystery of this giant human. 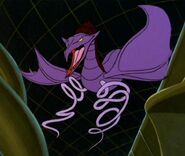 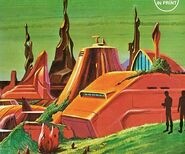 A city on Phylos II.