"The Jihad" was the first season finale of Star Trek: The Animated Series, airing during the week of 12 January 1974. The episode was written by Stephen Kandel, directed by Hal Sutherland and novelized in Log Five by Alan Dean Foster.

VHS teaser
Captain Kirk and Mr. Spock join a team of aliens trying to recover a sculpture containing the soul of their spiritual leader before a Holy War breaks out.

The USS Enterprise was summoned to a Vedala asteroid, where a Vedala briefed Kirk and Spock about a threat to the galaxy. Skorr Prince Tchar explained that a sacred artifact was stolen, one that would incite a vengeful galactic war if the general population of his homeworld found out about it. The Soul of Alar artifact had been tracked to the Mad Planet, a geologically unstable world where three expeditionary forces sent by the Vedala were lost. The fourth team would consist of Kirk, Spock, avian Tchar, tracker Lara, reptilian Sord, and lockpick Em/3/Green.

The team materialized on the Mad Planet with provisions and an all-terrain vehicle. The artifact's indurite composition was quickly located by scanner before planetary conditions overloaded it. Since Lara had seen it, her infallible sense of direction would serve to guide them. The team faced wildly changing climates and hostile terrain en route, and were forced to burn out their vehicle's engine to evade lava from erupting volcanoes. They pressed ahead on foot until they came across a locked Skorr temple.

As Em/3/Green picked the complex lock, flying robot sentinels captured Tchar. Inside, the team located the missing artifact floating out of reach within a force field. Kirk suspected a traitor had killed the other teams, and called out Tchar, who flew into view above them. Tchar congratulated them on getting them this far, but revealed himself to be an insane zealot who conspired to lead his brethren to battle, even if his war wiped out his people. He engaged a gravity neutralizer to give his teammates a good death, so they could combat him in the air. Fighting in zero-g, Kirk and Spock were eventually able to grab hold of Tchar and the artifact, then request recovery.

The team rematerialized on the Vedala asteroid, with Tchar now sealed within a clear container. The Vedala thanked them for their service, which had to remain secret for the good of the Skorr, and promised to cure Tchar of his insanity. When Kirk and Spock beamed back to the Enterprise, only a couple of minutes had elapsed, allowing them to provide a cover story that nothing had happened.

Tchar and the Soul of Alar. 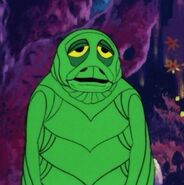 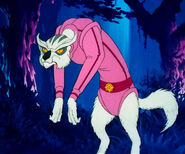 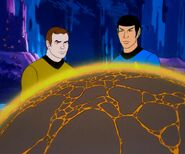 Hologram of the Mad Planet. 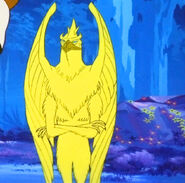