From the book jacket
When Captain Kirk and his crew are ordered to Alnath II to challenge the deadliest Klingon starship Terror, they're ready for anything - or so they think.

But the defenseless Vulcan crew of a Federation science ship has been wiped out. The remaining member of the Alnath II mission have discovered a fabulous ancient city, but their report doesn't make sense. The Klingon battlecruiser has the Enterprise in its sights, and ready to destroy it.

The crew of the Enterprise are losing their minds... one by one... all victims of...

The Enterprise is sent to Alnath II, where they find the entire crew of the Vulcan starship T'Pau dead with no apparent cause. An Andorian archaeology team led by Doctor Threllvon-da is still on the surface unharmed. The Klingon warship Terror is in the area but no evidence can be found they were responsible for the Vulcans' deaths.

Threllvon-da is convinced Alnath II once held an advanced civilization but the only artificial structure on the surface is a single pyramid, leaving him to believe there is an underground city there. The Klingons turn out to be after Alnath II for its topaline reserves but their attempt to mine it inadvertently breaks through into the city, even though their scans didn't detect it.

Meanwhile, the Enterprise crew start acting strangely, with some having character traits exaggerated, such as McCoy's mistrust of machines and Scotty's obsession with improving his engines, while others act on previously buried desires and Spock begins alternating between an emotional state and one obsessed with logic. Chekov nearly fires on the Terror when a message indicates the Klingons are planning to attack but the message comes from Kislath, the ship's first officer, who is trying to take command. The ship's captain, Kalan, has already executed several crewmembers for mutiny.

Kislath strands Kalan on the surface and has the Terror attack the Enterprise. Kirk refuses to return fire, instead challenging Kislath to personal combat on the surface. Seeing Kislath about to ambush him, he tricks him and Kalan into fighting each other before stunning Kislath just as he shoots Kalan. Kalan's injuries are treated and Kirk exchanges the captive Kislath for a crystal taken from the pyramid. Kalan agrees to allow the archeological team to continue unmolested in exchange for the mining rights.

The crystal turns out to be the keystone of the ancient civilization: There is no other trace of them because the crystal could make their every desire come true. Since the newcomers lacked the discipline to wish for material things, it has been trying to make their deepest desires come true, such as the Klingons' desire to command their ship and Spock's conflicted desire to be either fully human or fully Vulcan. The T'Pau crew "died" because the crystal granted their wish to evolve to a non-corporeal state. Kirk seemed unaffected because what he desired most was a peaceful solution to the Klingon problem. The city turns out to be just another of the crystal's creations, responding to Threllvon-da's desire to find one. 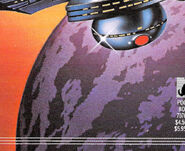