The Klingon Ultimatum was a 12-page Star Trek: The Original Series comic strip published in 1970. It was the 11th story arc in the UK comic strips series, released in six parts within issues of TV21 & Joe 90. This was the last of 11 stories illustrated by Harry Lindfield. In this story, the Klingon Empire aimed a metaweapon at Earth.

Teaser summary, 24 January 1970
Despite an uneasy peace treaty that had lasted for several years, the warlike powers of the Klingon Empire had secretly longed for the means of smashing their sworn enemies in the space Federation. Now, at last, their ruthless leaders were ready for an act of supreme treachery…

A Klingon strike raider made a surprise attack on the USS Enterprise. Stunned by their audacity, James T. Kirk pursued the raider to the uninhabited planet Seggor, then accompanied a team in an armed shuttlecraft to the surface, but they were unable to locate the raider. A hidden Klingon guard kidnapped crewman Hoskins, dragging him underground to a secret base. There, he became a living test subject for the granulator, an experimental weapon. Hoskins was returned to the team via a lift shaft. When Kirk reached to touch him, Hoskins collapsed into a pile of dust.

To lessen risks, Kirk beamed up all but Hikaru Sulu and himself. Suddenly they were captured by Klingons and taken into the base. The professor in charge used the granulator to return Hoskins to normal. He then turned their shuttle to dust, through its force field. The granulator had limitless range and could disintegrate anything. He then gave Kirk an ultimatum: procure the surrender of the Federation, or he would fire their weapon of mass destruction at Earth. Completely demoralized, Kirk and his crew beamed up.

Kirk updated his senior officers, but Montgomery Scott wouldn't accept their fate. He told Leonard McCoy that perhaps Kirk had been hypnotized or duped. Before McCoy could stop him, Scott transported to the surface. Kirk was forced to leave Scott behind and leave orbit. Meanwhile, Scott adjusted his communicator to act as a sonar scanner and located an access point into the base. He sneaked in, knocked out a guard, and jammed the firing mechanism before he was discovered. He then scrambled to the surface and called for emergency beam-out. Klingons targeted the Enterprise, but the weapon backfired — it destroyed itself, the base and a dozen square miles of the surface. Kirk would have court martialed Scott for mutiny had he not just saved the Federation. 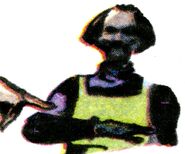 Klingon strike raider
Add a photo to this gallery

Retrieved from "https://memory-beta.fandom.com/wiki/The_Klingon_Ultimatum?oldid=673909"
Community content is available under CC-BY-SA unless otherwise noted.