The Original Series No. 28

8899.7
McCoy finally gets the last word! So why doesn't he look happy about it? – "The Last Word" was the 28th issue of DC Comics' first series of TOS comics. Published by DC Comics in 1986, it was the Star Trek debut of artist Gray Morrow and the second of five comic arcs contributed by novelist Diane Duane.

Letter column teaser
When a crew member dies on a planetside mission, McCoy think it's time to ship out of Starfleet, but first he has one final duty to perform: save someone's life.

Medical log stardate 8899.7: A personal note. After the recent situation with the spirit of Redjac, I find the crew back to normal – especially Nancy Bryce – but for myself, I am merely tired. Even the intrusion by the Ajir and the Grond and Chekov's misfired drill routine have done little to make me feel useful. Sometimes I wish to remain in bed.

The USS Excelsior is approaching 12 Lyncis, a system with an unexplored Class M planet. A groggy Dr. Leonard McCoy is awakened by his sassy computer terminal. Admiral Kirk pages McCoy to remind him that a supplies usage report is due. After eating some unpalatable soft-boiled eggs in the mess hall, McCoy attends a senior staff meeting at which the landing parties are discussed for that afternoon's planned exploration of the planet. McCoy suggests to Kirk that he swap members of the landing parties so that Alain Reynolds and Greg Thometz, who are best friends, will be on the second party together.

Afterwards, McCoy meets in Sickbay with Tom Krejci and Lia Burke. He asks Krejci to prepare blood transfusions for the landing party members in case they are needed, but Krejci has already done so. He then discusses with Burke an apparent iron and carbon deficiency in the diet of Lt. Naraht, the Excelsior's Horta officer. During their conversation, McCoy asks when Burke will start calling him "Leonard". She answers that she will do so when McCoy calls her "Lia", and he complies. McCoy then calls Scotty and asks him to synthesize 40 kg of high-carbon steel and 20 kg of pig iron for Naraht to eat. Burke is summoned to the transporter room to join the second landing party, while Scotty laughs hysterically at McCoy's request.

After doing some paperwork, McCoy is interrupted in the middle of a routine physical by word of an emergency with the landing party. McCoy and Krejci rush to the transporter room as Uhura tells them over the intercom that Thometz has been attacked by an animal, and that Burke says his injuries are probably fatal. As they arrive in the transporter room, Burke is covering Thometz's body with a sheet. Reynolds says he killed the thing that did it, and then collapses.

In Sickbay, McCoy orders Thometz's body put in stasis. Burke, covered with Thometz's blood, expresses sorrow that she couldn't save him. McCoy turns their attention to Reynolds, who is unconscious but seems uninjured. Burke performs a brain scan, which comes out normal, and tells McCoy that the planet has no plants or microbes that could have harmed Reynolds. As Burke leaves Sickbay to go off-shift, Kirk enters.

McCoy describes Thometz's injuries to Kirk and tells him there is no physical cause for Reynolds' worsening condition. Kirk says Reynolds' service record shows that he has never seen anyone die violently. Reminding Kirk that Reynolds and Thometz were best friends, McCoy suggests that Reynolds may have decided not to go on living. McCoy blames himself for Reynolds' condition because he suggested the switch of landing party members, but Kirk says the decision was his responsibility. McCoy tells Kirk he's having difficulty dealing with all the death they've encountered recently. Kirk says he doesn't know what to say, but that Spock might if he were there.

Kirk leaves, but the mention of Spock has given McCoy an idea. He recalls a recent instance of Spock using the mind-meld on the USS Surak. Quietly approaching Reynolds' bedside, McCoy places his fingers on his face and initiates a mind-meld, using the residual knowledge and ability left in his own mind from his experience of carrying Spock's katra.

McCoy finds himself in a dark place, but is able to summon a flame in his hand. The flame turns into a golden sword in the shape of a caduceus. He calls out to Reynolds, who appears before him after a moment. McCoy urges the reluctant Reynolds to remember what happened on the planet.

McCoy and Reynolds find themselves seemingly on the planet's surface. McCoy hears Spock's voice telling him he must bear what Reynolds could not. Reynolds and McCoy see Reynolds and Thometz as they were on the planet. As Thometz turns to Reynolds to make a joke, the creature jumps on Thometz and mortally injures him. Reynolds kills the creature as Lia Burke appears on the scene. Reynolds does not want to remember further, but McCoy tells him he will look at the memory with him. Thometz dies.

Reynolds says Thometz seemed to have a charmed life and planned to tell his children and grandchildren about his adventures in space. Reynolds says he wants to die, but McCoy tells him Thometz wouldn't like that. Reynolds agrees. McCoy says Reynolds can tell his own grandchildren about Thometz. He urges Reynolds to get some sleep. As Reynolds walks away into the mindscape, Spock appears. Claiming, in answer to McCoy's questions, to be both real and imaginary, Spock advises McCoy not to attempt a mind-meld again, since it is unlikely to work in different circumstances. McCoy testily declines Spock's offer to show him the way out of Reynolds' mind, saying he will find his own way and dropping the sword at Spock's feet as he leaves.

McCoy awakens to find Reynolds' vital signs improving. He is about to report this to Kirk when Burke re-enters Sickbay. Burke asks how McCoy remains resilient after a day such as the present one. McCoy replies that the Hippocratic Oath requires that they abstain from doing what is "deleterious", and that "Giving up is deleterious." Reynolds awakens and tells Burke that he wants to speak to McCoy "again". 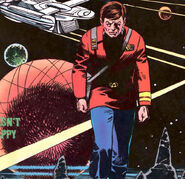