He was perhaps the ultimate human achievement: a sentient artificial life-form - self-aware, self-determining, possessing a mind and body far surpassing that of his makers, and imbued with the potential to evolve beyond the scope of his programming.

And then Data was gone.

Four years later, Data's creator, Noonien Soong, sacrificed his life and resurrected his android son, who in turn revived the positronic brain of his own artificial daughter, Lal. Having resigned his commission, the former Starfleet officer now works to make his way on an alien world, while also coming to grips with the very human notion of wanting versus having a child.

But complicating Data's life is an unexpected nemesis from years ago on the U.S.S. Enterprise - the holographic criminal Professor James Moriarty. Long believed to be imprisoned in a memory solid, Moriarty has created a siphon into the "real" world as a being of light and thought. Moriarty wants the solid form he was once told he could never have, and seeks to manipulate Data into finding another android body for him to permanently inhabit... even if it means that is Data himself.

Data returns to his home on Orion Prime to find both Lal and her companion, an Alice series android, missing. A message from Professor Moriarty reveals that he is responsible and offers to release them if Data can provide him and Countess Regina Barthlomew with physical bodies.

Moriarty explains to Lal and Alice that the destruction of the Enterprise-D affected his and Regina's world, wiping their two daughters out of existence. Their programme was transferred to the Daystrom Institute but a further disruption during Vaslovik's raid on the facility saw the rest of their world wiped out.

Data enlists the help of Geordi and together they contact Albert Lee, an old crewmate now working at the Daystrom Institute, who helps them breach the facility and determine Moriarty and Regina have escaped. Data then begins a series of deceptions with collectors such as Harry Mudd, now aged to the point he needs a mechanical conveyance, and Kivas Fajo and manages to gain possession of one of the mind transfer devices from Exo III and a damaged blank template.

Data meets with Moriarty and offers to use the device to transfer Moriarty's mind into his own body. Instead, he tricks Moriarty and places him in a memory cube, where Regina voluntarily joins him. Realising she is expected to return to her home, Alice attempts to leave by taking Lal hostage but Mudd, who Data and La Forge brought hidden inside the template, orders her to comply.

Some months later, Moriarty leaves a message with Lal, telling Data he and Regina have been given their physical bodies and had their daughters restored. 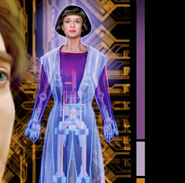