The Light of Kahless, Issue 2

The Light of Kahless, Issue 2

The Light of Kahless No. 2

24 January 2018
The Light of Kahless, Issue 2 is the 2nd issue of IDW Publishing's current series of Discovery comics.

The Star Trek event of 2017 continues with this exclusive tie-in comic to the blockbuster new television series! Secrets are revealed that will change the course of the galaxy forever!

Previously in STAR TREK: DISCOVERY...
Before he was a legendary warrior,T'Kuvma was a young klingon from House Girjah, a once mighty house in deep decline. The last hope to reverse his family's fortune is a ruined ancestral ship, long forgotten and hidden deep in the woods which T'Kuvma's sister J'Ula has vowed to rebuild. T'Kuvma longs to stay and help his sister, but instead is sent away to the monastery on Boreth... 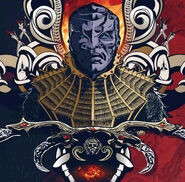 The Light of Kahless, Issue 2 article at Memory Alpha, the wiki for canon Star Trek.