The Lion and the Lamb

The Lion and the Lamb

Lieutenant Worf of the USS Enterprise is asked to undertake a covert mission by the Klingon Empire's High Council. A Klingon colony is threatened by an underground movement of the planet's indigenous life-forms - a movement led by Nikolai Rozhenko, Worf's human foster brother from the episode "Homeward."

Captain's Log, Stardate 46479.3
We have arrived at Lisarion. a non-aligned agricultural planet not far from the Klingon border, to perform our sad duty. Doctor Crusher would be beaming down with the rest of us, were she not visiting her son, Wesley back on Earth. However, she has sent her condolences. There is nothing more torturous for a parent than to attend the funeral of his or her child. Unfortunately, that is what we have brought the Rozhenkos, Lieutenant Worf's adoptive's parents, here to do. Adventure, self-sufficient community-- numbering hundreds of people-- was obliterated here... Wiped out in a raid by an unidentified invader. The reason? Greed, pure and simple. The intruders were after the community's valuable medicinal-grain stores. no doubt, there are worlds who would pay dearly for such a commodity-- though Lisarion woul have all but given it away. Nikolai Rozhenko, Lieutenant Worf's adopted brother and the natural son of Sergey and Helena Rozhenko was a member of this colony. As we understand it, he was one of first to perish in the massacre. Unfortunately, Nikolai Rozhenko was one of the very few off-worlders on Lisarion-- and he hadn't spoken much about his origins. As a result, it took the planetary government a rather long time to find and contact his family. Months have passed since what was left of the dead was buried in a mass grave-- and this memorial service for Nikolai Rozhenko must take the place of an actual funeral.

Security Officer's Log, Stardate 46479.9
I have received permission from Captain Picard to inspect the massacre site-- in the hope of turning up some evidence the Lisarionites may have missed. 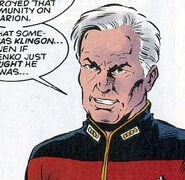 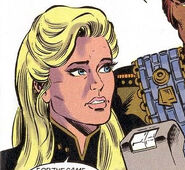