The Original Series No. 17

Captain's log, stardate 8214.5 – The Enterprise has been diverted from its normal course by top priority orders from Starfleet Command. We now orbit over the most populous continent of the planet Goran IV. Twilight will soon fall over this continent, but unless the Enterprise successfully completes her mission over one million people may never see another dawn! We must now prevent the Federation from becoming indirectly responsible for the deaths of millions of innocent people!

The Enterprise is sent to Goran IV after a Federation probe crashes, potentially causing a toxic gas to form in the atmosphere. The crew must determine if the primitive Goranians truly are in danger, or if the cure -- waiting for dispersal aboard the Enterprise -- will prove more harmful than the sickness.

Captain's log – supplemental: Mr. Spock, Dr. McCoy and I will beam down to the planet's surface to determine the effects of the gas – if any, on the Goranians. Mr. Spock, will check the progress of the natives for Federation records, killing two birds with one stone. I hope that is all that will have died when this mission is completed!

In disguise, the landing party materializes outside of a village, unaware their arrival has been witnessed by Lori, a young girl with a crippled leg. She reasons that since the trio appeared out of thin air, they must be angels and follows them. In the village, after McCoy separates to find the local hospital, Kirk collides with a renegade scientist named Gorman. He drops several scrolls, one of which contains a primitive diagram of the solar system which is considered heresy. Spock's attempts to talk to Gorman only gain the attention of the other townsfolk, who declare that anyone talking to the heretic Gorman must also be a heretic. The Clerics, more armed thugs than holy men, quickly arrive to take the landing team into custody. During the ensuing struggle, Spock's hooded disguise is pulled open, revealing his devil-like ears.

Meanwhile, McCoy finds the hospital, with Lori not far behind. He is shocked by the conditions where the doctors/priests leave the patients in agony because that is what the "Supreme Soul" has ordained. Wandering through the ramshackle structure, McCoy finds an elderly man, whom tricorder scans confirm is suffering from early-stage poisoning from the gas. After an injection of the antidote, the man begins to recover. McCoy's success is short-lived, however, when the Clerics burst in to arrest him.

Soon, all three crewmen are being held in the Cathedral, where the Clerics smash the communicators and tricorders. A Cleric finds Lori, who insists the strangers are angels, not devils. The Clerics feel the child has been misled by the devils, and plan to execute them at dawn. They also will "purge" Lori to remove the evil influence. Gorman, eavesdropping at the window, wants to help the strangers for showing him respect rather than fear. He also recognizes that the purging would kill frail Lori. Inside, Lori makes a dive for the shattered Federation gear and is pulled through the window by Gorman. Using his knowledge of the Cathedral's hidden passages, Gorman leads Lori to where the Enterprise crew is being held. Gorman gives the remains of a communicator to Kirk and Spock in their cell, but it is beyond repair.

Captain's log – stardate 8124.8, Commander Scott reportin': We ha' received na word from the landin' party, an' we still dinna know if th' antidote t' th' gas will cure the people of this planet – or kill them! Commander Uhura has been signallin' th' landin' party at regular intervals, but none o' them has responded... She is monitorin' all channels for any signal whatever – but there are none! In the hold sit the canisters o' antidote, waitin' to be dropped into the planet's atmosphere at a moment's notice, but I dare na release the antidote without knowin' for certain if it's needed – or I may doom the landin' party... and every livin' thing on the planet! Scott out.

A length of tritanium wire from the smashed communicator proves useful to saw through the bolt on the door. Kirk and Spock find McCoy's cell, but are forced to escape without him.

Captain's log – stardate 8124.9: Using information given us by the man, Gorman, Spock and I have escaped from the cathedral by secret passages! Unfortunately, we were forced to leave Dr. McCoy behind! We are without weapons or communicators, yet we must contact the Enterprise... or a planet will die!

Rendezvousing at Gorman's hut outside town, Kirk and Spock learn McCoy is to be executed at dawn in a trial-by-water. As Lori takes Kirk to the river, Spock finds that nothing in Gorman's lab can repair his communicator. He does see some chemicals that may prove useful, but he must knock out Gorman with a Vulcan nerve pinch to use them as he plans.

At the river, McCoy is strapped into a chair mounted on a long pole before the townspeople. The Clerics will dunk him into the river; if he drowns, he was innocent; if he survives, he will be killed as a witch. Dropped into the water, McCoy finds Kirk waiting for him with a knife to cut him free. They float downriver, but not far enough to escape notice. Before they can be recaptured, everyone collapses as the toxic gas takes effect. On the Enterprise, Uhura picks up a faint transmission from Spock, telling Scotty to release the antidote.

Captain's log – stardate 8125.2, Commander Scott reportin': As soon as th' signal from Mr. Spock was received, th' antidote was ejected into Goran IV's atmosphere. Th' pressure-sensitive canisters exploded at th' proper height, distributin' th' antidote thoroughly. It is too early t' tell if th' antidote was effective, or t' know if th' landin' party was saved. All we can do is wait, an' hope they contact us again.

Sometime later, Kirk wakes up in Gorman's hut, the antidote a success. Spock explains he used the materials and chemicals in Gorman's workshop to construct a rudimentary radio transmitter to contact the ship. He had to knock out Gorman to prevent him from seeing the device. McCoy easily fixes the gout-like muscle ailment in Lori's leg. Spock reassures Gorman he is on the right track with science over superstition, as the landing party beams back to the Enterprise. 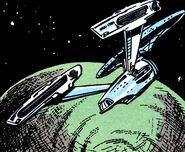 The Enterprise in orbit of Goran IV

Lori, a native of Goran IV. 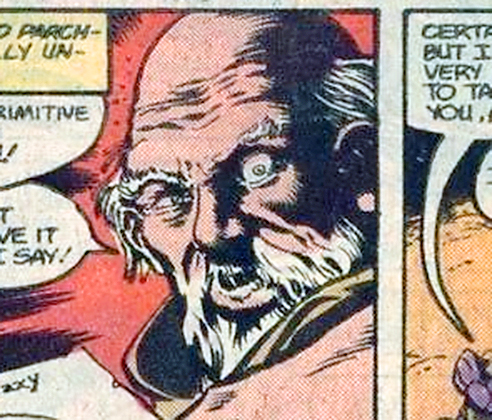 Gorman, heretic astronomer of Goran IV.
Add a photo to this gallery

Retrieved from "https://memory-beta.fandom.com/wiki/The_Long_Night%27s_Dawn!?oldid=648896"
Community content is available under CC-BY-SA unless otherwise noted.