"The Lorelei Signal" was the fourth episode of Star Trek: The Animated Series. It was produced in TAS' first season and debuted on 29 September 1973. The episode was directed by Hal Sutherland and written by Margaret Armen, who also authored the TAS episode "The Ambergris Element" along with three TOS episodes and one Star Trek: Phase II episode. Appearing in Star Trek: Log Two in August 1974, it was the fifth episode to be novelized by Alan Dean Foster.

VHS teaser
The male crew members of the USS Enterprise react strangely to a siren-like distress call from a planet of females. When the officers become captives on the planet, Lt. Uhura assumes command of the ship.

Captain's log, stardate 5483.7. The Enterprise is en route through an unfamiliar sector of space where a series of Earth Federation ships have disappeared mysteriously during the last 150 years. Recent joint discussions with the Klingon and Romulan Empires have revealed that a starship has disappeared in this sector precisely every 27.346 star years.

Ship's log, stardate 5483.8. Engineering Officer Scott in command. We are in orbit around planet two in the Taurean system. Probes and sensors indicate there was once a vast civilization here. Lovely. Lovely. However, life readings are sparse and concentrated. Captain Kirk is beaming down with a scouting party to investigate.

Captain's log, stardate 5483.9. The beauty of this place is unequaled. It's the answer to all of man's dreams. Exquisite in every way. We're here to investigate, to investigate... The women radiate delight.

Ship's log, supplemental. Lieutenant Uhura recording. Due to Chief Engineering Officer Scott's euphoric state of mind, I am assuming command of the Enterprise, I accept full responsibility for my action. A detailed account will be recorded later.

Captain's log, stardate 5483.7. The Enterprise has been ordered to provide standard escort for a small convoy of ore carriers heading toward Carson's World. Said ore carriers are to pick up and then transport to Bethulia III four million metric tons of heavy chromium and other duralloy ores. This shipment of alloy ores is necessary to the development of the burgeoning metals industry on Bethulia III, and to the planned construction next fiscal Starfleet year of two and possibly three new deep-space starships. In view of the Federation-Klingon Treaty of 5260 [sic] limiting offensive weaponry in this quadrant of space, it appears –

Ship's log ... stardate 5483.8. Chief Engineer Scott in command. We are continuing to hold standard orbit around a planet in the Taurean system. Probes and sensors utilized subsequent to the departure of the landing party indicate there was once a vast civilization here. However, life readings of any kind were sparse and concentrated. Captain Kirk has beamed down with others to investigate. Oh, fantastic!

Captain's log, stardate 5483.9. The beauty of this place is unequaled. It's the answer to all a man's secret desires, private fantasies, dreams. Exquisite in every way. We're here to investigate... here to investigate. To investiga... The women themselves radiate delight.

Ship's log, supplemental. Lieutenant Uhura recording. Due to Chief Engineer Scott's euphoric state of mind, which precludes effective direction, I am assuming command of the Enterprise in the absence of senior officers Kirk, Spock, and McCoy. I accept full responsibility for my actions. A detailed account of the events leading up to and dictating this action will be entered later. 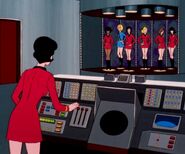 Engineer Lewis at the transporter.