"The Lost Years" tells the story of Captain Kirk's final hours in command of the USS Enterprise, and how he, Mr. Spock, and Dr. McCoy struggle to establish new lives apart from each other and the starship.

We see the newly promoted Admiral Kirk, in charge of a specially created Starfleet division, as he attempts to defuse a critical hostage situation; Mr. Spock, who in the midst of a teaching assignment on Vulcan, finds the one thing he least expected; and Dr. McCoy, whose unerring instinct for trouble lands him smack in the middle of an incident that could trigger an interstellar bloodbath...

The great Kolinahr master Zakal the Terrible is dying of lunglock fever at a retreat in the Mountains of Gol. His old student Khoteth comes to fulfill his long-ago promise to collect Zakal's katra. Zakal is scornful of Khoteth, who has become a follower of Surak and taken the name Sotek. Khoteth wishes to use the knowledge in Zakal's katra to render harmless a rival initiate named Nortakh and his followers. Unwilling to face oblivion, Zakal surrenders his katra as he dies to the vrekatra borne by Khotheth, but with his dying thought swears revenge on Surak.

Its five-year mission completed, the USS Enterprise returns to Spacedock in Earth orbit. Captain James T. Kirk is nervous about the fact that he has not yet received confirmation of his next assignment, having requested the captaincy of the USS Victorious ten weeks earlier. Kirk encourages Spock to take command of the newly-commissioned USS Grissom, but Spock wishes to continue to serve as Kirk's first officer and science officer and is displeased that Kirk has not requested that he be assigned to the Victorious with him. Kirk is being pressured to accept a promotion to the admiralty; he contacts Admiral Gregor Fortenberry, the "Detailer" who directs Starfleet assignments, who informs him that his request has been put on hold for review by Fleet Admiral Heihachiro Nogura. Dr. McCoy tells Kirk that his report as Chief Medical Officer recommended against Kirk's promotion, and that he has told Nogura the same, threatening to resign from Starfleet if Kirk is removed from field command. McCoy is planning to visit the Yonadan people, including his love Natira, on their new planet.

Lieutenant Jonathon Stanger, Enterprise's Security Second-in-Command, has been promoted to the post of security chief on the Victorious, but is unhappy because his lover, the Andorian Lieutenant Lamia, has been assigned to the USS Exeter. Stanger and Lamia attend the Security farewell party, hosted by Security Chief Ingrit Tomson. Kirk and McCoy visit the party, and Stanger tactlessly asks Kirk whether his assignment as captain of the Victorious has come through yet. Kirk and McCoy then attend the Engineering party, where Will Decker is in attendance. Kirk is stunned when Admiral Nogura enters Engineering, having arrived on board without Kirk's knowledge.

Dreadnought! - The events of this novel are referred to as the Rittenhouse Scandal. 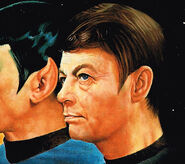 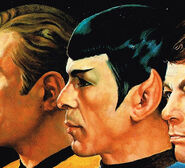 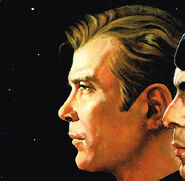