unknown
"The Mindless Ones" was a ten-page Star Trek: The Original Series comic strip. It was the 31st weekly story arc in the UK comic strips series, published in five installments in Valiant and TV21 in 1972. In this story, the USS Enterprise encounters a small sentient probe.

Teaser, August 12, 1972
For centuries, the process of eliminating people had been unknown on the planet Janvar. There had been perfect peace… until an attempt by six criminals to overthrow the regime! Caught, their punishment had been the removal of their minds... their personalities... which had been sent out on an endless voyage through space, contained in a metal cylinder...

Nyota Uhura picks up an SOS distress signal from the Janvar Five space probe, a device launched from Janvar centuries earlier, apparently to seek out intelligent life. James T. Kirk brings it aboard the USS Enterprise and Spock determines the probe's point of origin. The starship arrives in orbit of Janvar and Uhura establishes contact with President Kort. Kort spots the probe on the bridge of the Enterprise and panics. He immediately fires missiles at the Enterprise, intent on destroying the probe at all costs.

Force fields nullify the missiles. Still in a panic, Kort orders the "mindless ones" to be destroyed. These turn out to be the bodies of ruthless criminals kept in stasis, whose personalities had been jettisoned into space as an alternative to the death penalty. Janvar Five contains the minds of six ruthless rebels, and now they reanimate their former bodies on the planet, bursting out of their stasis chambers before guards can stop them. Via psychokinesis the probe paralyzes the crew of the Enterprise to prevent interference.

The criminals' bodies board a shuttle rocket. To buy time, Spock agrees to help them land aboard the Enterprise. He hypothesizes that the Janvarians' minds are overtaxed with the effort of controlling so many people at once. Montgomery Scott alerts the bridge that he's in the middle of a battery charge procedure which threatens to blow up the ship because he can't move to turn it off. Spock uses that emergency to distract the criminals — their rocket collides against the shields of the Enterprise and blows up. Now without purpose, the probe collapses, dead. 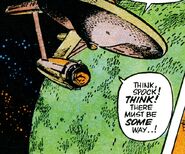