The Mirror War No. 3

The Mirror War, Issue 3 is the fourth issue in IDW Publishing's comic miniseries, The Mirror War. It was published on 5 January 2021.

Enter the Mirror Universe of The Next Generation! The Mirror War continues here! New problems arise as Picard and crew head towards Faundori. With no changes to their course, they are likely to be found by any number of Klingons or Cardassians – including Worf! With plans in place to destroy a Cardassian listening post, the crew of the Enterprise embarks on a dangerous mission...

Stardate 46922.1, at Picard's order, William T. Riker and Geordi La Forge have travelled to the gas production facilities on Kayree, renowned for their production of high quality gases. As La Forge begins negotiations, the Saurian reveals that the Klingons have put a bounty on the ISS Enterprise-D. Recognizing that this was a set-up, Riker and La Forge run back to their shuttlecraft, shooting a regulator. As they return to the ship, Picard furiously reveals that Riker created a chain reaction that has destroyed the planetoid, an explosion that quickly alerts Worf to their location.

In the observation lounge, Picard notes that, thanks to the explosion, the Klingon-Cardassian Alliance will likely soon find them and worse, they may even extrapolate their heading. The final obstacle they must overcome is Nopal Trem, a Cardassian listening post. The Enterprise's imperfect cloaking device cannot fully hide it from the station, the station has enough drones to compensate for a zig-zagging course, and destroying the station will no doubt alert the Alliance to their location. Their only option is to shut the station down. Just long enough for the Enterprise to slip past.

La Forge gathers Data, Barclay, Leah Brahms and Miles O'Brien in engineering, briefing them on the plan and their roles with Brahms managing to armtwist La Forge into letting her come aboard.

In Ten-Forward, Riker and Barclay invite Wesley Crusher to join them for a drink, both grousing about sneaking around instead of fighting. Later on, Barclay and Data are brought before the Inquisitor. After some prodding, Barclay defends his jumping realities as motivated self-interest being the guiding principal of the Terran Empire. And a vulnerable Data counters that Barclay was his first friend. Laughing, the Inquisitor takes Barclay's side, with the man himself noting that Data's hacking that led to the Enterprise was itself self-interest. Reflecting on that, Data excuses himself, noting that he has much to consider.

Later, the Enterprise warps past Nopal Trem, beaming over La Forge's team. With mechanical efficiency, the engineers shut down the station with Brahms taking the chance to climb the ranks by leaving O'Brien behind. Found by Cardassians, O'Brien is brought to Terok Nor.

In his darkened ready room, Picard justifies his actions to Beverly Crusher. Soon they will be at Faundori. Soon the Terran fleet will fly again. 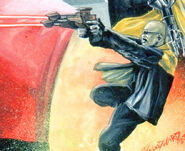 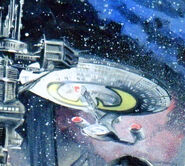 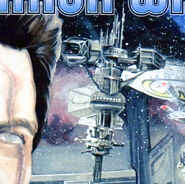 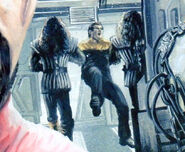 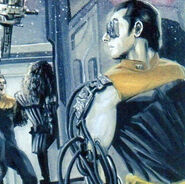 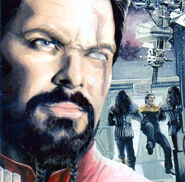