The Mirror War No. 4

As the ISS Enterprise-D continues its journey to Faundori, Jean-Luc Picard enjoys some time on the holodeck, reliving old Earth stories, before a second car manifests behind him, driven by the Imperial assassin. Unable to cancel the simulation and with all safeguards disabled, Picard turns to his driving skills, crashing the assassin's car. With the safeguards off, the gas tank ignites, ending the simulation and ripping a hole in the holodeck's wall. When the senior staff arrives, the assassin is unmasked as Whalen, the ship's historian and an old associate of Alynna Nechayev. With the ship out of warp for now, Picard questions about the rest of their plan, La Forge and Riker confident that they will overcome Faundori's groupthink.

In engineering, Geordi is approached by Lieutenant Lynch who is convinced that Leah Brahms deliberately left Miles O'Brien behind. Fully aware of this, LaForge throws Lynch against a wall and demands he keep out of his business. Riker then arrives, concerned with both the captain's increasing desperation and whether or not the holodeck explosion might have altered the Klingon-Cardassian Alliance to their position.

As it turns out, an alliance probe has registered an object dropping out of warp, the IKS Negh'Var dropping in above the Enterprise. Though the Enterprise's shields protect it, its warp drive is still minutes away from a reboot with disruptor beams causing electromagnetic damage across the hull. Watching the battle under cloak, Benjamin Sisko notes that the Denorios could easily pop in, blast a ship and jump out. Amused at the idea, the Intendant orders the Negh'Var targeted. Swooping in, the Denorios opens fire on the Klingon ship's engines, causing a cascade of system failures as it warps away. With its engines back online, the Enterprise warps away.

As the Enterprise sails, Riker notes that they will be found again. Feeling that they're too close to give up, Picard asks for suggestions, Data proposing that they employ a slingshot effect. If they decelerate at the correct time, they will merely be catapulted forward, not travel through time. Using Barrfex, the Enterprise is sent forth at great speeds and arrives at Faundori.

In the ready room, Picard is briefed on the progress they've made. Barclay and Data have made arrangements to meet with Larak, Azar and Naka, under the guise of privately purchasing vessels, though the Faundorans are not aware of their affiliation with the Terran Empire.

Beaming down into the city, Data and Barclay meet Azar and Naka just as the Enterprise begins an orbital bombardment. Holding the two Faundorans at gunpoint, the Imperials are led to Groupthink's chamber where Naka is killed. Plugging himself into the system, Data is confronted by Groupthink. Unwelcoming to the intrusion, Groupthink begins consuming the android's mind before Barclay speaks to his friend. Groupthink seeks only to exist, Data seeks to live. Determined, Data presses on and takes control of Groupthink. He is now Faundori.

In his office, Larak desperately attempts to access planetary systems before Picard enters, proclaiming his control of Groupthink and the planet. Taking a seat in Larak's chair, Picard notes that if the Faundorans build him a fleet, they all win. 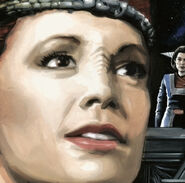 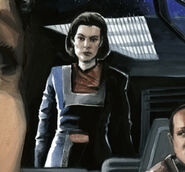 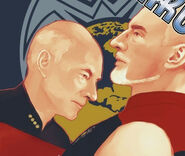 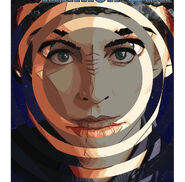