The Mirror War No. 5

6 April 2022
"The Mirror War, Issue 5" is a comic, the 5th issue of IDW Publishing's comic miniseries, The Mirror War.

Stardate 49725.3. It has been nearly two years since the Terran Empire conquered Faundori. And since then, a new fleet of Terran starships have taken flight. And among the first of that new fleet is the Nebula-class ISS Cronus, commanded by Data to reclaim Baggo Meer, once a Terran colony, now turned into a slave pit by the Klingons. Despite its power however, the Cronus is but one ship. If the colony is to be reclaimed, it must be done through cunning.

Data's plan is to enter a shell, normally meant for orbital bombardment, to quickly make his way to the surface. As Reginald Barclay takes command, the Cronus enters orbit, deploying the shell, making a fiery crash landing. Cutting his way through the Klingons, Data takes Gorofk, son of Maaq as his prisoner. In orbit, the Cronus holds off more Vor'cha-class vessels before six Nebula-class vessels warp in. Though Baggo Meer is once again a Terran colony, Data and Barclay can only wonder how the Klingon-Cardassian Alliance will respond.

On the IKS Negh'Var, a furious Worf is ready to retake the planet personally before his advisors manage to calm him. Conceding, Worf orders the fleet rallied.

On Faundori, Riker reports that the Klingons have not taken the bait and the massing of the Alliance fleet. Though Picard takes the news in stride, Elizabeth Shelby, a representative of Imperial High Command, is much less genial, questioning where Picard's long overdue fleet is, reminding him of his check in. On a screen, Alynna Nechayev, still speaking for the limp form of the Emperor of the Terran Empire, decides that Faundori is worth more resources than the Empire can spare. What few ships they have will be taken from Picard and given to a more capable commander. Furious, Picard rants that they just need a few more resources to conquer the final leg which gives the Inquisitor an idea. Having Gorofk brought to her, the Inquisitor reveals a misconception about Klingon psychology. Klingons do not fear dishonor. They fear appearing dishonorable to others. But, the Inquisitor, promises, no personal secrets will leave this room.

One agony booth session later and Gorofk has revealed the key shipping routes, Picard sending Riker and the ISS Enterprise-D to find them something. Prowling the space ways, the Enterprise finds the Girim, a Hideki-class carrying fruit and furniture. Unconvinced, Riker hails the ship and demands its store of dilithium. Though the Cardassians initially think themselves successful in bluffing the Terran, Riker orders a boarding party, he and Geordi La Forge finding a rich dilithium bounty.

On Faundori, Shelby attempts to convince Picard to prematurely deploy his fleet, but he refuses to launch anything but an unstoppable force. At that moment, Riker enters with a barrel of pure dilithium. He has dozens more, enough to raise up the fleet, and the knowledge of how to get even more.

All of which is observed by a curious Guinan.

Referenced only
Terok Nor (mirror) 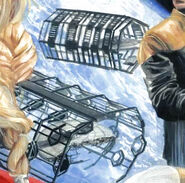 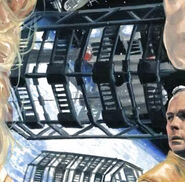 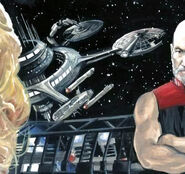 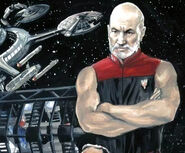 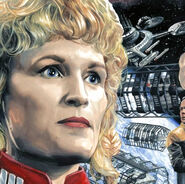