2371
At the edge of the final frontier.—"The Nagus's New Clothes" is a DS9 comic story that was one of two backup features in the Star Trek: Deep Space Nine Ultimate Annual anthology of stories.

Quark's suggestion to Grand Nagus Zek to hold a reception on the station has been welcomed by Zek, who arrives on the station for the event. Quark immediately regrets his idea, as Zek wants Quark to arrange the food for all three thousand guests. Zek plans to wear a ceremonial robe when he arrives at the event, and orders Quark to have it pressed.

Quark and Rom open the trunk containing the robe, but discover that it has turned to dust. While Odo has the dust analyzed, Zek demands a new suit from Quark. Odo suggests approaching Garak. Garak agrees, but Quark has to cover Garak's expenses and advertise Garak's shop in the holosuites for a year.

Odo and Dax have determined that Zek's robe was deliberately destroyed by a chemical compound, and Jadzia wonders if a rival of Zek is trying to embarrass him at the reception. Dax is right, two Ferengi men working for a rival Nagus have been using the compound to destroy the clothes and destroy Garak's new robe for Zek. Odo catches them in the act and detains them.

With the robe destroyed and no time to make a new one, Garak suggests that they use a portable holographic device to make it appear that Zek is wearing a variety of stunning clothes. Unfortunately, the power fails in the device and Zek walks into the reception naked. Zek comments: "It's good to be the Nagus". 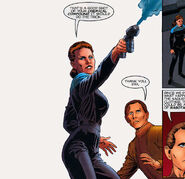