In 1994, several recently deceased individuals were frozen using cryonics, and sealed inside a spacecraft which was placed in Earth orbit. Among the individuals placed on the spacecraft were Ralph Offenhouse - a human male born on Earth in 1939 who made a career as a financier, Clare Raymond - a homemaker, and L.Q. "Sonny" Clemonds - an entertainer.

Over the years, the spacecraft drifted out of Earth orbit, and eventually left the solar system. Approximately 370 years after its launch, in 2364 the spacecraft was encountered by the Enterprise-D. The Enterprise was awaiting the return of Jean-Luc Picard from a high priority conference at a Starbase. Lt. Commander Data talked Commander Riker into allowing him to board the spacecraft so that he could get a first-hand look at the ancient technology. Riker allowed Data to proceed, and had Lt. Worf accompany him.

Data and Worf beamed aboard the spacecraft. They soon discovered a series of containers with frosted over transparent panels. Upon wiping the panel of one of the containers clear, they discovered a human skeleton contained within. Data soon determined that the people had been frozen after death, due to the absence of more sophisticated monitoring equipment. One of the other containers was empty, several of the other containers had human beings who had also decayed over the years. But Worf and Data soon discovered that there were three people - Offenhouse, Raymond, and Clemonds - whose bodies were still intact. When the shuttle carrying Captain Picard returned, Riker ordered Data and Worf back to the Enterprise. When Data explained the situation, they were allowed to beam the containers holding the bodies of Offenhouse, Raymond, and Clemonds back to the ship as well. The three 20th century humans were taken to sickbay, where Dr. Crusher proceeded to thaw them out.

Crusher found that all three humans had minor medical problems - which had obviously been fatal in the 20th century. Offenhouse had died of inoperable terminal cardiomyopathy, Raymond from an embolism, and Clemonds from years of alcohol abuse.

While Offenhouse and the others were being revived, the Enterprise began to travel to the Netural Zone to confront a Romulan warbird. Offenhouse found himself and the others in the middle of a tense situation, which he made worse with demands to know what was going on, and even going so far as to leave his quarters and go to the main bridge just before the Romulans revealed themselves. Before being escorted off the bridge, he was able to determine that the Romulans had no idea who was attacking their outposts near the Neutral Zone. The Romulans announced that they were returning to the galactic scene after being silent for over half a century.

Following this confrontation with the Romulans the three 20th century humans returned to Earth on board the USS Charleston. Before leaving the Enterprise, Captain Jean-Luc Picard told Offenhouse that money no longer had the meaning it once did to humans, and to use the opportunity he received to better himself.

The mysterious attacker of the Federation and Romulan outposts in this episode was revealed to be the Borg in Q Who?.

A Borg attack on one of the Romulan outposts was depicted in this one-shot comic.

Ralph Offenhouse returns to the Enterprise as a Federation Ambassador.

Depicts Ralph Offenhouse working for the Chrysalis Project as backstory to the data he gives in Debtors' Planet. 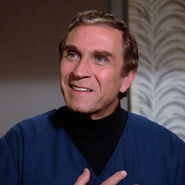 Claire Raymond frozen
Add a photo to this gallery

Retrieved from "https://memory-beta.fandom.com/wiki/The_Neutral_Zone?oldid=644729"
Community content is available under CC-BY-SA unless otherwise noted.