The Original Series (US Comic Strips) No. 13

7760.5
"The Nogura Regatta" is a Star Trek: The Original Series comic strip. It is the 13th story in the US Comic Strips series, published daily in newspapers over a period of seven weeks by the Los Angeles Times Syndicate. The story was set during Captain Kirk's second five-year mission aboard the refit USS Enterprise (NCC-1701). In this story, ambitious pirates attack Federation starships during a celebratory race.

Captain's Log: Stardate 7760.5.
To celebrate Admiral Nogura's birthday, a group of cadets headed by the admiral's grandson, Kyoshi, have organized a starship regatta.

The race is a rally-style race between six Federation starships. Two other captains participating are Kirk’s friend Bob Clark with the Cutter-class USS Rim Explorer and Kirk’s former Starfleet Academy student Vera DiMarco with the USS Bold Venture. Kirk’s command crew is initially hesitant to participate, but Kirk wins them over with the notion of competing for the pride of Starfleet.

That evening, Kirk has dinner with DiMarco, who tries to get Kirk to reveal weaknesses to the Enterprise left over from their battle with the Kzinti. Kirk says she’d been an unusually aggressive and competitive student. McCoy compares her to a Dalgorian water viper.

Early the next day, Kyoshi explains the rally-style rules to Kirk’s crew. Ships are handicapped to equalize their capabilities, and each is given a sealed pouch to unseal at a designated checkpoint that reveals a mission to complete en route. As a warp twelve cruiser, the Enterprise will depart last. Amongst themselves, Kyoshi and two cadet friends discuss how the race, Kyoshi’s psychology term project, is designed to “bring out the best and the worst in all participants".

Clark’s ship reaches its checkpoint and is directed to the Hydra Daco system to retrieve a deep-sea batfish. DiMarco tries to break open her pouch before reaching their checkpoint. Enterprise leaves at 0740 hours at warp seven. At its checkpoint, Kirk learns he has to retrieve a Thorian blood rock on a planet deep within Free Trader Lanes, a sector notorious for criminal activity.

Kyoshi’s cadets dock at the Free Trader station and meet with Captain Sturdevant, commander of a massive Free Trader pirate starship. Kyoshi pays Sturdevant to delay the racers, but the pirate instead kidnaps the cadets, heads to the Hydra Daco system and destroys Rim Explorer. Focused on the race, DiMarco ignores Rim Explorer’s distress call, but the Enterprise diverts and rescues Clark's crew.

Captain's Log: Stardate 7759.3.
The Enterprise is in orbit around Thoris Amarnis 4…

Beaming down, Kirk, Spock, Leonard McCoy and Montgomery Scott find that the blood rocks supply light and heat to local inhabitants, and taking one would be a crime. Feeling like laboratory rats, they choose instead to trade for the rock. DiMarco also feels the race was rigged — Bold Venture's crew had been manipulated into kidnapping a telepathic reptilian — so Bold Venture changes course and joins the Enterprise. Meanwhile, the cloaked Free Trader ship has also arrived in the Thoris Amarnis system. Sturdevant and his fellow Free Traders plot to attack, capture and sell the Enterprise to Klingons.

Feeling guilty for the mess they'd created, the cadets escape the brig and deactivate the pirate ship’s cloaking device. DiMarco decides to beam aboard and rescue the cadets. Her first officer says the race has changed her, that she wasn’t usually “heroic". DiMarco feels guilty for having not rescued the crew of Rim Explorer. Kirk and DiMarco beam aboard the cargo hold of the pirate ship, surprised to see each other. Kirk’s blood rock overheats the cargo hold, leading two pirates to investigate. When they don't return, Sturdevant goes to check on the hold, only to find himself at the wrong end of Kirk’s phaser pistol. He surrenders, preferring the brig to facing Klingons who’d already paid him for the Enterprise.

Leaving the system with the cadets, DiMarco suggests a private race, head to head, with no tricks, and Kirk accepts. At warp 11, the Enterprise crosses the finish line 29 hours later, just ahead of Bold Venture, the last to arrive in the official regatta. DiMarco then asks Kirk to dinner in Chinatown. 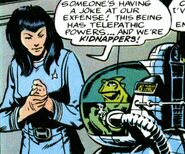 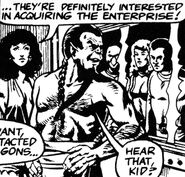 DiMarco took out a pirate. 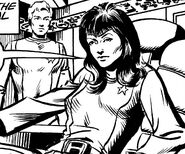 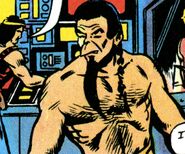 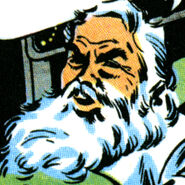 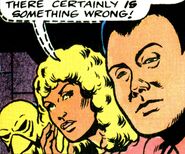 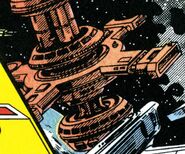 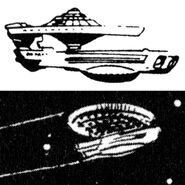 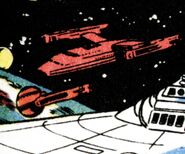 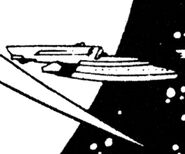 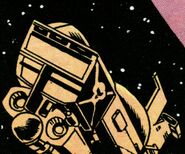 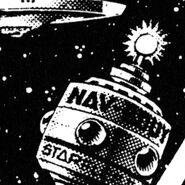 Cadets captured by the pirates.

Cadets conversation in the cantina.