47996.7
Alien Spotlight: "Andorians" (later titled "The Old Ways") was a Star Trek comic, the third installment of the Alien Spotlight series released in 2007.

In the vast Star Trek universe, many diverse alien races abound, and now they finally get their due! Continuing a series of one-shots, each by a different creative team and featuring a different Star Trek alien race. Now, the spotlight shines on the Andorians. In this issue written by Paul Storrie, Andorian Ortees Sharad, a commander in Starfleet Intelligence, returns to his homeworld while on leave and finds himself in the midst of mistrust and deception, and is captured by a renegade commander of the "True Heirs of Andor." 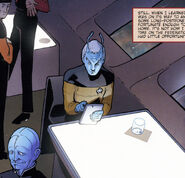 Sharad in a cell.

Sharad and Kovan in the ushaan.