"The Omega Glory" was the 54th episode of Star Trek: The Original Series, the 25th episode of the show's second season, first aired on 1 March 1968. The episode was written by Gene Roddenberry, directed by Vincent McEveety and novelized in Star Trek 10 by James Blish. The story was subsequently adapted by View-Master.

Captain's log. Aboard the USS Exeter, commanded by Ron Tracey, one of the most experienced captains in the Starfleet. What could have happened to him and the over 400 men and women who were on this ship?

Captain's log, supplemental. The Enterprise has left the Exeter and moved into close planet orbit. Although it appears the infection may strand us here the rest of our lives, I face an even more difficult problem. A growing belief that Captain Tracey has been interfering with the evolution of life on this planet. It seems impossible. A star captain's most solemn oath is that he will give his life, even his entire crew, rather than violate the Prime Directive. 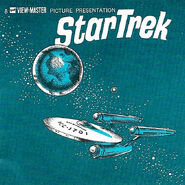 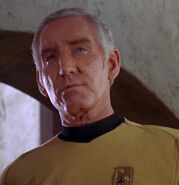 Cloud William about to be executed.