The Original Series No. 49

2281
The Federation faces extinction from an awesome new weapon!—The Pandora Principle, by Carolyn Clowes, was the 49th novel published as part of Pocket Books's numbered series of TOS books, released in April 1990.

A Romulan bird-of-prey mysteriously drifts over the Romulan Neutral Zone and into Federation territory. Captain Kirk and the crew of the Enterprise investigate, only to find the ship dead in space. When Starfleet orders the derelict ship brought to Earth for examination, the Enterprise returns home with perhaps her greatest prize.

But the bird-of-prey carries a dangerous cargo, a deadly force that is soon unleashed in the heart of the Federation. Suddenly, the only hope for the Federation's survival lies buried in the tortured memory of Commander Spock's protégée, a cadet named Saavik. Together, Spock and Saavik must return to the nightmare world of Saavik's birth—a planet called Hellguard, to discover the secret behind the Romulans' most deadly threat of all…

The Enterprise discovers a ship containing a dying Vulcan woman who Spock mind melds with. He secretly leads a group of Vulcan to Hellguard, a world in the Romulan Neutral Zone. This planet is home to a group of half-Vulcan half-Romulan children, the products of rape who were abandoned there. Spock insists they should become integrated into Vulcan society and is given a year's leave from the Enterprise to raise one of them, Saavik. After years of Spock's mentoring, Saavik eventually attends the Academy.

The Enterprise discovers a drifting Romulan ship with all of its crew dead. It is fitted with an unlimited cloaking device and two multi-colored glowing boxes. They are ordered by Starfleet Command to bring the ship back to Earth. Kirk realizes this is part of a scheme to return him to a ground assignment and tries to avoid it by sneaking into Starfleet Headquarters to file a report in secret. However, the glowing boxes in the Romulan ship are discovered to be filled with a molecular weapon that destroys all oxygen molecules in an environment. Everyone in Starfleet Headquarters is killed except for Kirk, sealed in the basement vault at Headquarters. Another glowing box is opened in the sealed Life City, and all its inhabitants are killed.

The Federation prepares for war with the Romulan Star Empire, unaware the molecular weapon was actually created by a secret Romulan cabal, the Twelve. Spock learns from Saavik that she saw the glowing boxes as a child when they were being prepared on Hellguard. He obtains permission to take the Enterprise to Hellguard to investigate. En route, they take onboard a Romulan smuggler, Achernar, who is actually working for Tahn, a disenchanted member of the Twelve.

Spock and Saavik beam down to Hellguard. Saavik uses her memories to lead Spock to the manufacturing complex where she saw the molecular weapon boxes being stored. They encounter the architect of the molecular weapon manufacturing, which was tested on the parents of the Romulan children, but he commits suicide before they can get information from him. Spock plans to detonate a bomb in the store of the boxes, but Saavik incapacitates him with a Vulcan nerve pinch and plants the bomb herself. They are both beamed aboard but not before the boxes are breached by the explosion, which sets off a chain reaction that destroys Hellguard.

After a short confrontation with the Enterprise bridge crew, Achernar starts negotiations with Tahn. The two strike a deal that sees the Twelve exposed while Than slips away. McCoy realizes that Saavik survived exposure to the molecular weapon because of elements in the dust in the cave on Hellguard. Starfleet manufactures this dust and uses it to neutralize the molecular weapon on Earth. Kirk is allowed to remain as captain of the Enterprise.

See the continuing voyages of the USS Enterprise
2274
Enterprise attempts to rescue T'Pren, Spock pursues her origin on Hellguard. (A year prior to Spock's tutelage of Saavik)
2275
Spock attempts to civilize Saavik. (Six years prior to the story)
2281
Saavik enters the Academy, Enterprise discovers the derelict. (Date of Academy entrance in ST reference: Star Trek Chronology') 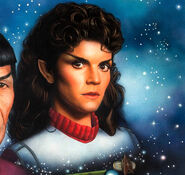 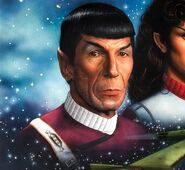 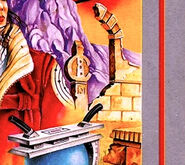